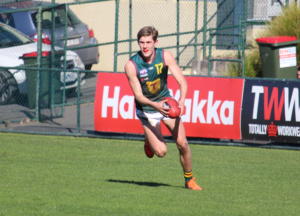 DRAFT ANALYSIS: “Walker is a smooth moving utility who can play anywhere from the wing, to half-back and half-forward and generally uses the ball very well.” – Peter Williams

Patrick Walker is an outside midfielder who can play in all thirds of the ground. He is a player who has shown he can use the ball well whether it be in the back 50, on a wing or inside 50, with good decision making skills to match his ball use. He has all the traits to develop into a strong outside performer, but needs to iron out a more even inside game, as well as consistency across the board.

Walker enjoyed a really strong bottom-age season for the Tasmania Devils last year where he predominantly played off half-back. That suited his gamestyle perfectly because he was able to win the ball and run in transition, making good decisions with ball-in-hand. For North Hobart prior to his season-ending injury, Walker was utilised in multiple roles across the campaign, even spending a game as an inside midfielder. In saying that, his inside game, such as his contested work and tackling pressure, as well as his consistency are areas he can still further develop to become a more complete performer.

Looking at his strengths, Walker can find the ball, make the right decisions and execute it well. Of all the top-age Tasmanian prospects, Walker is the cleanest with his ball use, and most consistent in terms of executing by hand or foot. In saying that, Walker can also be inconsistent when it comes to impact across an entire match, with some really big quarters, and then some quiet ones. He arguably has the most upside of those from the Apple Isle, with plenty to work with for an AFL club going into the future. Last year he ran at 69 per cent efficiency by foot, but also had just 31 per cent contested possessions, so a great user, but still has that inside area to develop.

Walker’s upside and size of 187cm – he has grown a couple of centimetres this year running around for North Hobart in the TSL – means he is in the taller end of midfielders and allows him to be utilised there, or off a flank at either end. It would be great to see him spend more time in the midfield, but he still has room to grow in the strength department, weighing at just 76kg.

Unfortunately his season-ending injury stopped him from testing at the AFL Draft Combine, but his best tests in the preseason were his running vertical leap (75cm) and his agility (8.34) while his 3.11-second 20m sprint is not reflective of his in-game ability. He is by no means a speedster, but he has that time and composure to deal with situations.

If Walker can continue to build on his inside game a little more and just get that consistency through his game to have an impact when his side is not always on top – as can be the case with outside midfielders – then he looms as a net mid-to-late draft prospect.

Walker certainly looms as a draft prospect who has the potential to be value in the middle of the draft. He has clear areas to address, but they come with time and with a change in role. Walker has shown he is capable of playing on the inside, but while some outside midfielders can win the ball on the inside whilst being in the outside role, Walker generally handball-receives and tries to run in transition.

Overall, for a side looking for a clean user of the footy with good upside, the North Hobart prospect is one who with the right development and role, could be a solid choice.