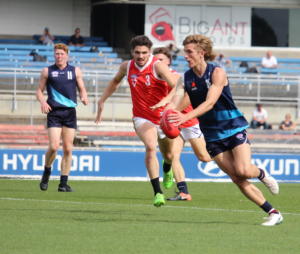 DRAFT ANALYSIS: “Lewis is a dashing wingman/defender who likes to run and carry and create with his left boot who can run all day with his elite endurance”

OSCAR Lewis started to catch the eye early in the season seemingly unknown he managed to win Vci Metro election for the National Championships managing to play two games averaging 12 disposals and four tackles. Lewis looked exciting carrying the ball and gliding across the ground effortlessly and kicking long on his trusty left boot, he has played in a range of positions even spending some time forward through the finals adding another string to his bow and at 189cm he is a nice size able to potentially play a range of roles. He has some areas to improve on such as his accumulation and contested game, but his outside game is quite solid thanks to his running ability.

Lewis looks best running with ball in hand and he is certainly a metres gained type of player able to run his full distance and kick 50 metres so despite his low disposal numbers he can get quite a lot out of his disposals. He might not be the quickest straight off the mark, but can hold a consistent speed across the ground which is still quicker than most running around, and once he has taken off, he can be difficult to catch. He has elite endurance which is needed to play as a modern day wingman who are expected to work back and forward able to help the defence and also go forward and hit the scoreboard and Lewis has certainly showed he could become that type of player, Lewis finished top five in the yo-yo test at the National Draft Combine, which was an impressive achievement so clubs will be confident he can run out a game at AFL level when required. The fact he can play in all thirds of the ground is a credit to his ability and his hard running. With an 83cm running vertical leap at the National Draft Combine, Lewis has that potential to leap at the ball and fulfil the forward role he was tested out in late in the year, or in defence as an intercept player.

Lewis has played his roles well but his contested numbers are very low only winning three contested possessions over his two games at the National Championships and that is an area he will need to improve at the next level as you need a good mix in modern AFL. At NAB League level, he averaged a solid 63.6 per cent efficiency by foot, but just 26 per cent of his possessions were in a contest. Lewis is a good metres gained player and does not need a lot of the ball to have an impact. However, most modern wingman at AFL level average at least 20 disposals a game, where as Lewis has averaged only the 13 disposals in the NAB League so this is an area he will need to address as he has the fitness base to be able to win more of the ball and the more he can run and carry the ball the better he and his team will look.