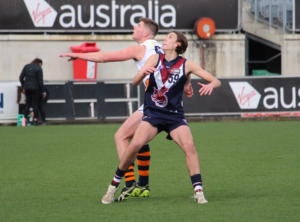 There may well be a few clubs seeking for long-term key forward replacements at this year’s AFL Draft, and Ollie Lord is one of the many candidates putting his hand up for selection. The Sandringham Dragons product boasts great athleticism, using his speed off the mark and vertical leap to time some eye-catching marks inside forward 50. He is the grandson of former Geelong champion and Brownlow Medallist, Alistair Lord, and continues his family’s ties to the region as he boards at Geelong Grammar. It means he has also played a lot of his football in the APS system, managing five NAB League outings in between his commitments there. But squeezing into the stacked Dragons side of 2019 is no mean feat, and Lord’s appearance in Vic Metro’s Under-17 squad, his Futures All-Stars selection, as well as a National Draft Combine invite this year all suggest he is certainly on the AFL radar.

While hardly limited to it, the crux of Lord’s greatest strengths can be observed as he frequents the forward 50. His athletic package is highlighted by sharp pace off the mark and a springy vertical leap, both of which combine well as Lord sets off to present and mark on the lead. His ability to pop up and clunk some eye-catching contested grabs was evident towards the back-end of last year’s NAB League season, as well as in his various representative and showcase outings.

Being able to provide such form more consistently will be a big step in his development, with his current output sitting at under a mark and goal per his five NAB League appearances, while averaging just over a goal per his APS digs. Another developmental stride would be to continue working on his ruck craft. At 195cm, Lord may well have a bit of growing left to do and as he adds weight, his ability to chime in at ruck contests inside 50 could later translate to more substantial rotation on the ball.

Something which may further aid that shift is the fundamental work Lord is focussing on. His aerial prowess is great, particularly once he has gained separation, but the youngster has been putting work into the contested marking and one-on-one departments. His bodywork, positioning, and strength in the air are areas which he would have hoped to showcase some marked improvement in this season with time out on the park. Adding that strength to his already-present aerial nous will make him a dangerous, and much more well-rounded key forward.

Another point of difference for Lord is his ability to be clean with ball in hand; whether that be on the gather, or in disposing of it. It means he could develop into a centre half-forward who provides a linking target up the ground, while having the obvious weapon of leading out from closer to goal in his locker.

Although there is a raft of key position options available in this year’s crop, particularly early, a club which sees and values the upside of Lord could well look to snap him up with a later pick. The third round is where he may come into consideration, though the proposed culling of list sizes will likely see the draft last not much longer than that. As a long-term prospect who has a high ceiling as far as key position players go, Lord would be a shrewd choice who can thrive with the right development. He has the obvious family link to Geelong, and one to Melbourne having trained there during the off-season.