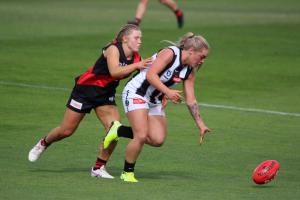 Olivia Meagher enjoyed a step up from the NAB League Girls to the VFLW this year, holding her own against more experienced opponents throughout Collingwood’s unbeaten campaign.

Olivia Meagher came into Collingwood’s VFL Women’s program this year with the more traditional pathway behind her. Representing the Eastern Ranges and leading by example there, Meagher also stepped up to play for Vic Metro and even earned an AFLW Draft Combine invite last year. Once again the talented hard-nosed midfielder earned an invite on the back of some terrific state league football.

In previous years Meagher’s inside game has been her bread and butter, no issues winning the ball at the coal face and shoveling it out to teammates, or putting her body on the line. It earned her the Eastern Ranges captaincy last year, and whilst she did return for her 19th year, Meagher ended up becoming a more regular fixture in the Magpies’ side.

Despite the Magpies dominating the VFL Women’s Meagher more than held her own, showing her strength in one-on-one, working hard around the ground with good endurance and thrashing the ball out of contested situations. Whilst an area she can improve on is hitting the scoreboard more regularly – sometimes playing off a half-forward flank – when in the middle, Meagher has no trouble finding the ball or getting it out to teammates.

Going forward, Meagher’s outside game can continue to develop, though she showed in 2021 that she had made progress in the area, and her strength one-on-one is never doubted despite often being undersized in marking contests. If she gets a chance at the top level, expect her to potentially play as a pressure forward who could roll through the midfield, and there is little doubt she will put the work in, after some ultra-consistent efforts over the past few years.

“Another player who went back to her NAB League Girls club Eastern Ranges after missing out on being drafted despite a Draft Combine invite, Meagher spent three games with the Ranges before making the transition into Collingwood’s VFLW team. There she improved her versatility to play inside and outside after being a dominant contested ball-winner for the Ranges in 2020. She is damaging forward of centre, and despite not having high mark numbers, she is strong overhead for her sub-160cm size. She is someone who could play in transition between midfield and forward, and is a fierce player with a great attitude and would be one the Magpies – or another team – could consider calling up to their AFLW list.” – Peter Williams via “Draft Central AFLW Draft Power Rankings – Victorian Pool: June 2021”

“After missing out on being drafted last year, Meagher went back to the Ranges where she played three games before stepping up to represent Collingwood at VFL Women’s level. There she became a consistent performer, even earning a place in the Anzac Day winning side, and averaging 14.5 disposals per game across six matches. She put up numbers of 18.7 disposals, 4.7 inside 50s and 5.3 tackles for the Ranges earlier in the season, and at 157cm is strong overhead. She has proven she can play inside or outside, and is a natural ball winner with defensive and team-orientated goals.” – Peter Williams via “Ones to Watch: AFLW Draft – Victorian top-age talents”

“Keeps finding herself in ball winning positions all day. Gives multiple efforts to try to win the ball, leading to her extracting the ball or slowing the opposition down. Can also break away from opposition when she has the ball. Has excellent kicking ability over short-medium distances.” – Alex Venning via “Top Performers: NAB League Girls – Round 4”

“One of the leaders among Eastern’s side and a player gunning to prove her worth as an elite level prospect, Meagher continued her strong start to the season with 22 disposals (17 kicks) and seven inside 50s. While capable of doing the tough stuff through midfield, the top-ager was able to find a bit of freedom in moving the ball forward to good effect. She is the kind of player who will prove a barometer for this Ranges outfit, which is currently in very good form.” – Michael Alvaro via “Top Performers: 2021 NAB League Girls – Round 3”