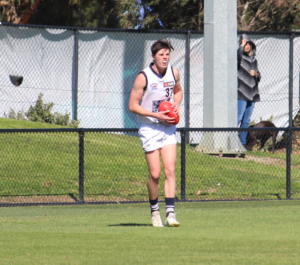 DRAFT ANALYSIS: “Henry is a versatile utility who has impressed in both attack or defence” – Peter Williams

Oliver Henry is one of the more versatile players in the 2020 AFL Draft crop for his ability to play at either end. As a whole, Henry is a first round prospect for a combination of his athleticism, reading of the play, decision making and adaptability to play in attack or defence. He has some nice upside, and once he can develop some more strength to win one-on-ones, and gain greater consistency throughout four quarters, then he will be a special player.

Different clubs will have different plans for Henry and where they see him fitting into their line-up for the future. The brother of Geelong’s Jack who has settled into defence, Henry is able to legitimately have an impact be it deep in defence or deep in attack. In terms of his vertical leap, Henry has strong hands and can pluck down marks, be it leading out or intercepting, and it makes him a damaging player in the air. Likewise at ground level, Henry is not out of the contest and has the mobility to win the ground ball and then make the right decisions with ball-in-hand.

Henry booted 18 goals in 15 games last season which was quite impressive given he did spend time in defence. Twelve of those goals came in three consecutive matches from Round 3 to Round 7, where he also booted five behinds and had an additional three scoring shots. By the end of the season, Henry racked up 11 marks – four contested – as well as eight rebounds and 24 disposals running out of defence in a remarkable effort. For a player who is still light at 77kg, Henry was able to take 1.5 contested marks per game. He is able to do so thanks to his impressive vertical leap and strong hands, with opposition players more likely to beat him in a wrestle at ground level. Once he has the space to leap, it is hard to contain him.

The other area that Henry can definitely improve is in his tackling numbers. He averaged just over a tackle a game, and only laid more than two tackles on three occasions in the NAB League last year. His bread and butter is his aerial work, and he can win the ball at ground level, but he can certainly add extra elements to his defensive game. He is a high-level offensive player, and that is what makes him so damaging, but once he can build the two-way aspect, he will be a worry for opposition players, particularly when it comes to locking the ball inside the forward 50. When he has the ball, he makes the right decisions be it exiting the back 50 or kicking inside 50, so has plenty of elements to like about his game.

Unfortunately due to a precautionary hamstring strain, Henry sat out testing in the preseason this year, but for a player like the Falcons’ talent, his testing numbers are not indicative of his ability. In his bottom-age year he ranked well below average for his 20m sprint and agility, and even had a fairly low vertical leap. In-game though, Henry is not someone weighed down by his athleticism, and whilst he might not have elite pace or mobility, it does not hinder him and he has that remarkable presence in the air.

Expect Henry to land somewhere in that top 20, potentially pushing up into the top 10 if a team is willing to take a chance on the talented utility. Ideally there is no doubt the teenager would love to land alongside his brother at Geelong with the Cats’ holding three first round picks, but there is little doubt many teams have a need for a high-flying forward or intercept defender.