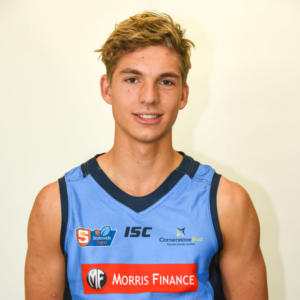 A VERSATILE tall utility with nice kicking skills, Grivell has the size to play as a tall or small at 191cm and 85kg. While Grivell needs to develop his accountability and tackling pressure – averaging just 1.6 tackles per game in the Reserves this season – he has the footy smarts to play a key role up either end with his marking ability and neat disposal going forward. His two-game berth in the SANFL League early this season came on the back of a solid Under-18 year in 2018 where Grivell used his size to snare a couple of nice bags up forward, but his best form came with a move up the ground and into the Reserves side this season. Although he is filling out nicely, Grivell would be a touch undersized as a true tall at the next level but could easily transfer his skills to different roles at either end, pending an endurance boost.