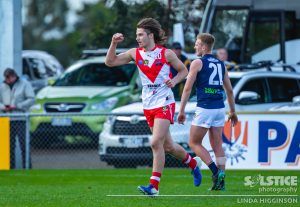 DRAFT ANALYSIS: “Davis has some of the cleanest hands on the inside and is a tackling machine, earning him the 2020 TSL Rising Star award.” – Peter Williams

Oliver Davis has been one of the more consistent performers throughout the last 18 months, with his ball-winning abilities and contested work mighty impressive. His ability to win the ball in close and feed it out by hand, or lay multiple tackles on opponents to force a stoppage, is all part of his gamestyle every single week. What stands out the most is you know what to expect from Davis, and while he does have his shortcomings in certain areas, he is the kind of player who will never stop wanting to improve, nor give anything less than 100 per cent effort, which when a game is on the line, is exactly what you expect.

Where Davis rates in terms of his pure inside traits would certainly be in the top dozen prospects in the AFL Draft crop. Consistency is a huge tick for the teenager, and in leading both his school, Guilford Grammar and the Tasmania Devils, he is one of the more natural leaders going around. His work on the inside, where he finished the 2020 TSL season ranked first in tackles (7.1) and effective tackles (5.4), as well as top five in handballs (9.6), and top 10 in disposals (19.7) and contested possessions (8.7), is testament to his work rate and consistency. He earned the Matthew Richardson medal as the Rising Star of the competition, also making the TSL Team of the Year on the interchange.

Considering his impressive year and bottom-age season for the Devils in 2019 – where again he was a standout through the middle as a co-captain – Davis has traits that could see him step into a lineup straight away, but still has areas to work on. Whilst his inside game is as good as most his age, his kicking consistency on the outside is an area of improvement, as is his ability to impact the scoreboard. He booted two goals in 11 games from the midfield, and whilst not all midfielders kick goals, it is certainly a way that Davis can add an extra string to his bow. When describing his kicking consistency as an improvement, Davis is often able to hit those short, sharp kicks, but it is just reducing the amount of rushed kicks long that are often intercepted. A way to further improve that is to continue working on his burst speed out of the stoppage, which right now he exits through power – shrugging off opponents – or via hands to an outside teammate to run the ball long. An extra few steps of acceleration would allow him another crucial split second before he has to dispose of it.

Despite these areas of improvements, considering Davis’ role, you cannot fault him for his traits in that role. His hands, his contested work, his clearances, and his work rate are all right up there with the top under 18s going around. The culture he would add to a club is certainly also in his favour, and as already mentioned, he has hardly put a foot wrong in terms of his consistency. For a teenager to lead a senior league in tackling is an impressive feat, so you know he will not back down from a challenge. There are no doubt a number of clubs considering him as a readymade inside prospect who will thrive in an elite environment.

Davis certainly represents value in the second half of the draft, and whilst judging on his inside traits alone he would be higher up, he is the kind of kid that could prove a lot of people wrong early in his career, with similar traits to James Worpel who was selected later than some expected, but has taken to the elite level like a duck to water. Make no mistake, there are things for Davis to work on, but if you are after a consistent inside midfielder willing to give 100 per cent every match, then he is hard to look past, and his 2020 season should have seen him do enough to spark the interest of AFL clubs.