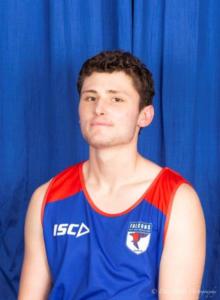 ONE of the more interesting stories of Western Australia’s state combine, the mature-age Pegoraro has plied his trade as a reliable key defender this year after not playing in the elite system previously. The 22-year-old joined West Perth from Kingsley, managing eight games between the Reserve and League grades, possessing an elite running vertical leap (92cm) and footy smarts that help him behind the ball. Having come on so rapidly already, Pegoraro could be one to adapt his athletic traits and reading of the play to a different role at the next level given he is a little undersized compared to the modern key position archetype, and he has shown a knack for reeling in double figures in marks and disposals. Pinch-hitting in the ruck also adds to his versatility, making him a mature-ager to consider going forward should he be overlooked this year given his rawness.