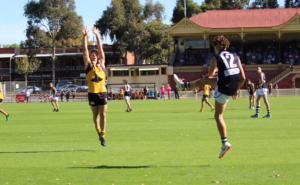 DRAFT ANALYSIS: “Gribble is a midfielder who has no trouble finding the football and being a work horse around the ground with great defensive pressure and clean hands in congestion” – Peter Williams

Noah Gribble was another player who unfortunately missed out on the 2020 NAB League season due to injury, rather than the COVID-19 pandemic. The talented Geelong Falcons’ midfielder injured his anterior cruciate ligament (ACL) last November and has been diligently recovering from that since. Possessing a great set of inside traits, Gribble knows how to find the football, win it in close and give it out to teammates, and also applying good pressure to the opposition. He does have some clear areas to work on with his speed and foot skills to round out his overall game, but remains a chance to be drafted despite the injury.

Gribble had a good bottom-age season for the Falcons, playing in 15 of their 16 games and showing he had what it took to succeed at the level. He provided his side with a four-quarter consistency more often than not, winning about 40 per cent of his possessions in a contested manner. Whilst his disposal-winning areas suggests he can be a balanced midfielder, Gribble’s traits definitely lend themselves to being an inside midfielder. His ability to dish off by hand out of congestion is a highlight in his game, and his defensive pressure – despite only averaging just over two tackles per game is also good.

Like a lot of inside-leaning midfielders, Gribble is not the quickest player, injured over the off-season so unable to test there, but recorded a 3.22-second 20m sprint at the 2019 NAB League Testing Day. For the role he plays, Gribble does not so much need the speed as he just outworks his opponents around the ground and is able to bury himself under packs and feed the handballs out to running teammates.

The other area Gribble could work on is his kicking, which can be inconsistent compared to his inside hands. Whilst he is often quite effective in close, his kicking on the outside even can improve, and that would no doubt be an area of focus over the extended break. As already mentioned he only laid the 2.2 tackles per game, but that is not indicative of his pressure around the stoppages, and for a smaller inside midfielder, he certainly packs a punch.

Furthermore his ability to hunt the ball around the ground – where he averaged 17.2 disposals, 2.3 inside 50s and 1.7 rebounds – showcases his work rate across the ground and a determination to be the best possible player for his side. He shows no fear and is able to provide an extra number back in defence, then double-back on the counter attack and even have shots on goal. Unfortunately he finished the 2019 season with one goal, seven behinds to his name, so scoreboard impact is definitely another area of improvement for the midfielder.

Gribble was one player that likely would have progressed into the inside midfield this season had it not been for his injury, and then the COVID-19 pandemic. He has put enough runs on the board to suggest he will come into consideration, but likely to be late in the draft.