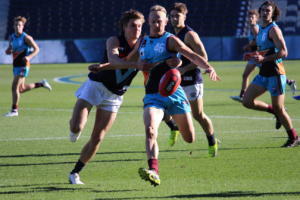 DRAFT ANALYSIS: “Aggressive both with and without the ball, Cumberland is a midfielder/forward with a terrific mix of inside and outside traits.”

BRISBANE Lions Academy product Noah Cumberland showed great improvement this year at both Under-18 and senior level to throw his name into the hat as a potential top 40 pick. Originally a pressure forward, Cumberland has grown to have an impact up the field and excelled for the Allies during the National Carnival – crowned by his 18 disposals and two goals against South Australia. Cumberland’s impact also extends beyond the common stat line, with his defensive pressure, aggression around the ball and fend-offs all things which catch the eye of close watchers. The one-percenters helped Cumberland fit the mould of a role player, but his extended damage with ball in hand made him much more than that as the year progressed. His five-game experience against mature bodies in the Lions’ premiership-winning NEAFL side also bodes well, with Cumberland finding the goals in three of those outings. While the Lions will be happy to have produced another promising academy member, they may find themselves having to pay up in points come draft night.

Cumberland’s National Draft Combine performance has propelled his value once again, finishing fifth in the 20m sprint (2.931 seconds) and eighth in the agility test (8.208 seconds). His speed shows on-field too as he breaks the lines on the outside and takes on his opponents at will. The agility aspect is more obvious in-close as Cumberland combines his power with being fleet of foot to bustle through congestion. Together, these elements make up much of the Maroochydore junior’s aggressive style of play, which is evident both with and without the ball. His willingness to take the game on and use his penetrating kick going forward is one aspect, while his bullocking style around the stoppages going both ways is the other. Cumberland’s average of almost five tackles per national carnival game is right up there, as is his ability to score in almost every outing and it gives him that desirable mix of inside and outside play.

While his effort and rate of improvement cannot be denied, there are still areas of improvement for such raw players, and especially ones who have spent time on the sidelines due to injury. Cumberland’s penetrating kick is definitely an asset – more than 50 per cent of his effective kicks are long – but it is those short, 45-degree kicks and overall lowering of the eyes that will make Cumberland a more complete forward mover. He is quite kick-happy and often does so on the end of bursting runs, so can become really damaging with some sharpening up, finishing the Academy Series with a 52.5 per cent kicking efficiency. The other area of improvement is building that consistency and finding the ball more often though, with Cumberland breaking the 10-disposal mark at NEAFL level just once – to his credit, in the Grand Final – and he has the potential to do so, as seen in his 26-disposal effort against Dandenong in the NAB League. He may well enter the elite level as a pressure forward, but has the scope to become an effective inside midfielder with some work.