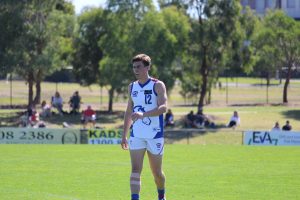 The now 19 year-old, Noah Answerth looked set for a big 2017 after impressing in the pre-season and early rounds before a freak injury against Eastern Ranges ruined his chances of getting drafted. He went back with the flight of the ball showing his trademark courage and severely hurt his back, pretty much bringing his season to a close. Although there was some late interest from clubs where he was able to play in the young guns game of that year and give the recruiters something to think about. Ultimately Answerth did not get drafted but he would come back again this year to captain the Oakleigh Chargers and he was one of his teams better players in their grand final loss. He lifted in the second half of the game when all looked lost and really imposed himself through the midfield and showed his terrific work rate. Answerth got to represent Vic Metro in the National Championships and he more than held his own. There is not much more he could have done this year to catch the eyes of recruiters.

Answerth is a highly competitive player who hates to lose and will scratch and fight his way to win the ball or make a contest. Last year he played mostly as a shut down defender and would often get the job on the dangerous forward and look to take them out of the game while also providing rebound, he may not be quick but he is always trying to move the play forward and attack. Answerth leads from the front so it came as no surprise to see him named as the Oakleigh captain. His courage and aggression at the contest is second to none, that paired with his willingness to assist teammates are all good traits of a leader and he could very well find himself in the leadership group of an AFL club down the line.

Despite his hard and attacking nature he has very clean hands at the contest. He is very safe by hand often hitting his targets and they are usually long handballs to release teammates and not put them into trouble. Answerth is a willing tackler and a hard tackler, he does not give an inch and that goes for the midfield and as a defender where he can shut down a dangerous forward. He is able to do this on a regular basis due to a high endurance base, which saw him remarkably record 21.2 on the National Draft Combine Yo-yo test, despite missing most of his bottom-age year with the serious back injury.

Answerth is not a player likely to be eye-catching with his disposal, but he often uses it fairly well, averaging 75 per cent by foot at the National Under 18 Championships for Vic Metro, but just the 58.5 per cent at TAC Cup level. He had a low clanger kick percentage (9.2 per cent) showing he rarely turns it over, and that his kicks are more inefficient than clangers. Overall though, he can be relied upon with ball in hand, particularly when coming off half-back.

Answerth is one of those players that ticks a lot of boxes, so it is hard to pinpoint too many improvements. But the one area he could improve is with his ability to hurt the opposition with more damaging disposal and run.  He has shown an ability to win a large amount of the ball as a clearance midfielder at the next level, but is more of a safe user of the football than a penetrating super boot. He has shown through his goal kicking . and when kicking out that he has a raking boot that can travel some distance, but often he opts for safer options, or to give the handball off. In many ways, it would be great to see him back himself to be the player that penetrates the opposition zone and adds a few more weapons to his arsenal. One player of a similar projectory is Collingwood’s Tom Phillips, who had the same improvements to make at first – great athlete, did very little wrong,  just needed weapons – and he turned into a goal kicking midfielder who not only has elite endurance, but hurts teams forward of centre. These are not knocks on Answerth, mere ways to go from being a very solid player, to a damaging player.

Answerth has left no stone unturned this year, after the disappointing injury last year Answerth set out to make the most of his final TAC Cup year which he did leading his team to a Grand Final, earning Vic Metro selection and he finishing the year as a committed and consistent performer at all levels. Answerth may not have the speed and polish that the top end talent in this years draft has but if a club wants a dedicated and hard working player that is ready to go and will give 100 per cent to an AFL career then Noah Answerth will fit the bill.