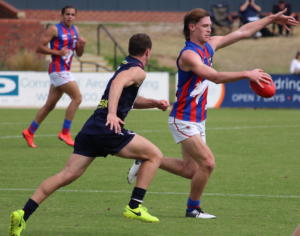 DRAFT ANALYSIS: "Anderson is a complete prospect who has the ability to tear games apart with his presence inside 50 and around the ball."

A PLAYER long-touted as a top-end prospect, Noah Anderson returned a stellar season in 2019 and looks poised to end the year as a top-two draft pick. Along with good mate Matt Rowell, Anderson was a prime mover in the Carey Grammar, Oakleigh Chargers, and Vic Metro midfields, averaging around 25 disposals across the NAB League and national carnival. On top of his consistency, the Metro skipper has an unrivalled scoreboard impact when compared to fellow midfielders in this year’s crop, while also providing the size and x-factor that club recruiters love. Those kinds of traits allow him to completely dominate at times, with Anderson the kind of player to have the fabled 30 disposals and three goals every other week. A player for the big moments too, Anderson is the complete package and should slot straight in at the next level.

Nailing down only a few strengths for a player as complete as Anderson is difficult, as there are a number of traits which help him stand out. When you envisage a snapshot of how Anderson plays, it is that classic burst away from the stoppage and long roost forward that we love to watch at the next level. Those bursts can be put down to his power and natural size, coming in at just under 190cm as a midfielder. His power then translates to his disposal, with Anderson trusting his leg to consistently kick over 50m to either send the ball inside 50 or through the big sticks. An underrated part of Anderson’s game is his spread – with some pigeonholing him as an inside type – but his contested possession rate of 52 per cent is not as massive as others at the top end. The Chargers gun works well around the ground and finds the ball forward too, which ties into that all-important scoreboard impact. Anderson was kept goalless in just two of his seven NAB League outings, with a bag of four and two bags of three among his efforts. That four-goal haul came in a massive 44-disposal effort, with Anderson’s ability to completely dominate a game obvious from the outset. Anderson is also an outstanding leader to-boot, not just carrying the captaincy tag for Vic Metro, but often putting each side he was in on his back – with his last quarter against Sandringham in Round 17 to turn around a five-goal deficit arguably his best of the year.

If nailing down his strengths was difficult, imagine being tasked with naming Anderson’s improvements. Even an improvement at the start of the year in Anderson’s speed has improved, recording 3.09 seconds in the 20-metre sprint in the pre-season to now finishing in 3.03 seconds at the National Draft Combine. Combine this with his power that allows him to break free of would-be tacklers. Looking elsewhere, Anderson’s kicking consistency is an area he looks to have worked on but it is obvious he still favours long, penetrating kicks. Given that is the case, and amount of time he spends at the coalface, his below-60 per cent kicking efficiency is no real surprise but could be helped by lowering his eyes as he is usually a neat field kick at short range.