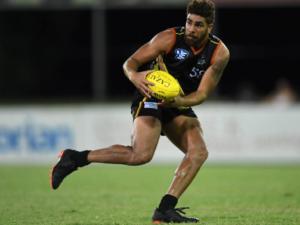 A versatile player with good skills, Lockyer has put on some size of late, having represented Northern Territory in both basketball and Australian rules football. He is a high-leaping talent at both ends, who recorded 87cm on the running vertical jump at the State Combine, and clocked up 2.93 seconds on the 20m sprint. He still has to build his fitness, but is a raw mature-age talent with confidence in his game. Since his impressive state combine outing, Lockyer returned home the very next day to play for Palmerston in the Northern Territory Football League (NTFL), booting three goals in consecutive outings and becoming a key cog in the Magpies’ setup. A player who rates his well-rounded game, Lockyer has continued to develop since his draft year to now be a genuine mature-aged prospect with good size. Lockyer Jnr represented Northern Territory in the TAC Cup back in 2016, averaging the 8.7 touches and three marks. Fast forward to 2019 and while he still averages just the 10 touches and 3.5 marks per game, he does it agains senior bodies and it is more his high impact per possession that catches the eye.