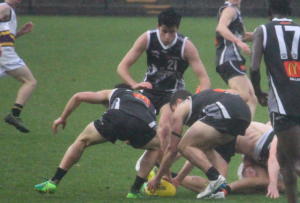 DRAFT ANALYSIS: “Stevens is a classy tall defender who can play further up the ground with strong decision making skills” – Peter Williams

Nick Stevens is that third tall defender who has the capacity to play in other roles across the ground, but has been able to slot in and find a role at half-back. Having torn his hip flexor in his bottom-age year ruling him out of the first half of the season, Stevens came back to play six games in the NAB League, which is unfortunately all he managed to do for the year, but the AFL Academy member did show off his wares in that short stint of time and capped off 2019 by performing in the Under 17 All-Stars showcase.

While Stevens has not played a heap of football at Under 18s level, he did impress at the Under-16 Championships and it is easy to see why he was included in the National Academy. He has class and composure with his ball use and a penetrating kick which he uses to springboard out of the back half and down the ground to provide some good run. To exemplify his work rate, Stevens improved his 20m sprint and endurance work from the preseason testing to last month’s Draft Combine testing, taking a tenth of a second off his 20m time.

Stevens said he wanted to build his endurance base during the preseason, and he certainly did that with a strong 6:32 time at the Draft Combine. Standing at 192cm, a big question for clubs will be where he plays at the top level. He is that in-between height of 192cm where he will likely settle as a rebounding half-back. While it would be great to see him increase his versatility, he certainly has no troubles playing the role. In terms of his execution by foot, he more often than not hits the target, but is prone to the odd shank in the back 50.

His decision making as a whole is sound, and given he was able to run a 2.97-second 20m sprint after a 3.07-second time earlier in the year, Stevens has the capacity to become that athletic defender if need be. The question mark will come whether he can progress into the midfield, be it on a wing or on the inside, as he has pushed up the ground at times but not yet really been a force at stoppages. With his size and potential upside, Stevens could be a really promising player, and even if he ends up as that pure defender, can still impact with his ball use and decision making.

There is not much to go off for Stevens as he is one of those really affected by the lack of opportunities on the back of COVID-19 restrictions. Ready and raring to go in season 2020, he could have put together a really strong season and staked his case, but now he could end up a late/rookie prospect who is a low-risk, high-reward talent that teams can develop over time to have an impact in the long-term.