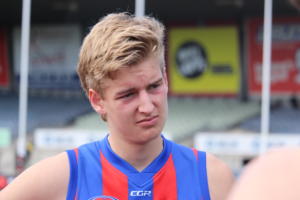 DRAFT ANALYSIS: "A developing ruck who has terrific athleticism and a high ceiling, Bryan just needs to build his consistency and have more of a presence around the ground to further build his game."

ONE player who was the talk of the AFL Draft crop at the start of the year was Nick Bryan. The Oakleigh Chargers’ ruck burst onto the scene after being not in draft contention as a bottom-ager, but through hard work and his testing results, was suddenly in the eyes of most clubs. Through no fault of his own other than being a phenomenal athlete, Bryan was talked up by some draft watchers as a first round pick. He blitzed the 20-metre sprint in the NAB League Fitness Testing Day, clocking up a 2.91-second 20-metre sprint, which for a 202cm player is remarkable, and showed in patches what he is capable of as a bottom-ager in limited games. As the season went on, and the Under-18 National Championships showed, Bryan still has a long way to go despite his obvious athleticism and upside. In the NAB League finals series, Bryan pieced together a number of strong performances on the big stage, and showed recruiters just what he could do once again, but as a whole, he still has plenty of development – and more importantly time – on his side.

While it might be said Bryan did not produce the hype that many had thought pre-season, the hype surrounding a 202cm player should always be fraught with danger. His best is very impressive, with his ruck work, vertical leap and athleticism highlights of his game. But at the end of the day, outside the top elite talents in each draft, most talls are still raw and developing, and Bryan, considering he has not had as much time in an elite system compared to some, is no different. It is more his presence around the ground with his contested marking and scoreboard impact, playing a role as a forward and consistently impacting the contest in that way. When at ruck stoppages, Bryan is hard to beat with his vertical leap and when he chooses to use it, his breakaway speed. In the pre-season testing, not only did Bryan clock up the 2.91-second 20-metre sprint, but also recorded 78cm on the running vertical jump. He improved that to 85cm at the National Draft Combine, while his standing vertical improved from 56cm to 69cm, showing he had been working hard off the field. His 20m went above the three seconds, but Bryan also spent time building strength on his lighter frame, which ultimately slows players down.

While Bryan’s inconsistent year saw Luke Jackson claim the standout number one ruck draft prospect title, Bryan is among a number of others, such as Charlie Comben, Callum Jamieson and Jack Bell who received National Draft Combine invites and are next in line in terms of ruck stocks. Bryan is likely to be second or third selected with Comben, and his upside certainly helps. One aspect where Bryan stands out from many other talls is his skill by hand being able to feed his midfielders and give it off cleanly though the middle. Any ruck that can have that speed and vertical leap as a combination makes him an interesting prospect. His work during the NAB League Finals series was very good, taking control against stronger rucks who he might have been outbodied against in the pre-season, now he was beating. In his final three games, Bryan had season-highs of 13, 15 and 20 touches, getting more involved around the ground, taking a combined nine marks in his two final games – showing improvement in his contested marking. He was dominant early in the first term of the Grand Final, setting the tone against the much stronger Riley Smith, but working his way to 20 touches, 26 hitouts and four marks, including 10 in the first quarter. It showed just what he is capable of, and if clubs look past the inconsistency and work earlier in the season while he was still developing, then Bryan is a player who has a bright future ahead of him. He is likely to be that mid-draft selection, which is normal for a ruck, and with his big-game experience late in the year, Bryan will have turned a few heads with his performances.