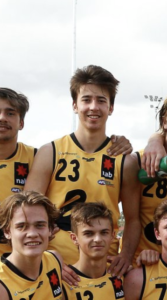 NICHOLAS Martin is a tall utility who predominantly played as a dangerous medium forward, but showed a tendency to get further up the field and have an impact with disposal hauls as high as 24 – twice. He is a bigger body that provides a marking target up forward, and hit the scoreboard regularly for Subiaco Reserves, booting three goals on two occasions after making the step-up from Colts in his Under-18 year. His size and elite agility put him in good stead for garnering interest, with that added versatility a key factor in considering prospects who play in medium-forward roles. Martin needs to improve his defensive pressure and find more of the football going forward to become an even more damaging prospect, with his efficiency in front of goal also wavering at times despite constantly finding the big sticks.