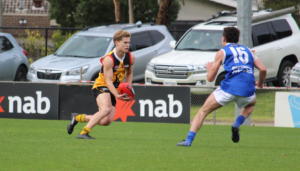 DRAFT ANALYSIS: “Cahill provides a rare mix of the flashy and more unheralded traits as a hard-working small forward who is developing his craft further afield.”

SMALL forwards are often patchy at best, but Dandenong Stingrays product Ned Cahill is one with many points of difference. Consistency over 12 games for the Stingrays and bursts of brilliance across four for Vic Country helped Cahill push into the top 25 range mid-year, blending shrewd work around goal with a high work rate up the field and his developing midfield game. A high-impact player, Cahill failed to find the goals in just four of his NAB League appearances, scoring in each Vic County outing and booting multiple goals in five other NAB League games. He has the potential to become that high half-forward who provides around 15 disposals and two goals per game, having averaged 18.3 disposals and 1.4 goals in the NAB League to go with 12.3 and 1.5 respectively at the national carnival. Unlike many others in a similar position, you know what you are going to get from Cahill more often than not, with his attitude and combination of growing accumulative ability and goal sense making him a reliable choice. Clubs after a hard-working small with a more refined area of growth need look no further.

Cahill looked like developing into a pure small forward with two promising displays early in the season where he hit the scoreboard from low disposal hauls, before springing to life through Rounds 3 to 7 where he averaged 23.3 disposals and two goals across the four games. Arguably the best game of the lot was his four-goal haul against Western at the end of that run, with Cahill’s goal sense and ability to work further afield at the fore. He is deceptively good in the air, with his footy IQ making each repeat lead a worthy one as a complete forward option. It means Cahill can find the goals in a range of ways, not limited to deep-lying crumbs off the packs and snaps around the corner. Most of Cahill’s best facets come from a good endurance base, with his 21.2 yo-yo score and 6.17 minute 2km time elite for small forwards and making up for a less elite speed rating. Still, Cahill covers the ground so well and is a menace inside 50 going both ways, adding defensive pressure to his attacking work. His average of over 3.5 tackles in both the NAB League and national carnival are great, with his presence around the ball particularly influential.

If Cahill can greater translate that presence to the stoppages, he also has the scope to become a midfield option. His 178cm and 77kg frame is the most obvious factor holding him back from that at the elite level, and Cahill also seems to rack up the ball much easier on the outside or when burning a direct opponent in the forward half. He showed he can accumulate as much as 29 disposals this year with some added midfield minutes, but will more likely become more of a role player up forward. And while Cahill is largely consistent considering his position, that area came a little unstuck during the national carnival – not for a lack of effort though. He had five outlying games of under 15 disposals in the NAB League and only averaged 12.3 for Vic Country, remaining relevant with his pressure acts but not always having the same impact going forward across four quarters. Perhaps that is to be expected for a small, but improving that will help Cahill become even more well-rounded.