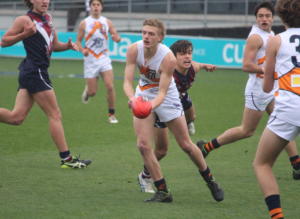 NATHAN Stewart played just the six NAB League games with the Cannons, but had roles as a medium defender who could provide both offensive and defensive pressure. Maintaining a consistent output, Stewart averaged a tick under 15 disposals for Calder, levelling between a low of nine and high of 16 while also finding the goals in two games to show his versatility. He laid an impressive 4.7 tackles per game this season and took a number of strong intercept marks, showcasing his springy vertical leap. At the State Combine, Stewart recorded a 92cm running and a 71cm standing vertical jumps, as well as a 3.03-second 20m sprint, confirming the athletic side to his game despite still having some improvements to make in that area.