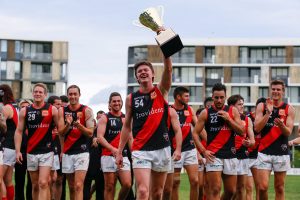 DRAFT ANALYSIS: “A hard-working midfielder who is elite in what he does without the ball, O’Driscoll stood out at the National Combine with his overall athleticism.” – Ed Pascoe

Perth midfielder, Nathan O’Driscoll has been a well known quantity heading into the 2020 draft, starting in 2018 with a strong Under 16 championships for Western Australia where he won All-Australian honours. He was only 181cm back then, but has now grown to 187cm and may yet grow even more. Starting as a defender, he has made the transition into the midfield in recent times where he has been a major ball winner at WAFL Colts level. In 2019, he represented Western Australia as a bottom-ager, where he played many roles while showing his tenacity and tackling pressure. Although not as prolific this year in the Colts due to an interrupted start to the year through injury, he still managed to work his way into Perth’s League side, becoming a mainstay and even getting to play in the centre against hardened midfielders. O’Driscoll unfortunately missed the WA All-Star games due to a shoulder injury, but he had certainly done enough through the year to showcase his talent.

There aren’t many players in this draft pool who work as hard as O’Driscoll does. He is a running machine who works hard whether his side is attacking or defending, which will make him very coachable in the modern game. There was one instance of his selfless running in a Colts game against East Fremantle, where he pushed hard from the forward flank, all the way to the opposite pocket knowing full well he wasn’t going to be used, but it was such a hard lead that his direct player was forced to go with him which opened up the space for his teammates to lead into. It’s easy to see his natural defending style through his tackling numbers, as he will always chase and will stick on his direct opponent like glue around stoppages. His time in the midfield at League level often had him going against the bigger and taller midfielder for the opposition side.

Despite being on the leaner side, O’Driscoll cracks in hard to win his own ball. Even at League level, he wasn’t afraid to get his hands dirty and with many young, lean players often used to having the ball come to them, it’s different for O’Driscoll who thrives on winning his own ball. This goes for his marks as well as he attacks the ball in the air, often showing courage either coming form the side or going back with the flight with eyes firmly on the ball and nothing else.

O’Driscoll blitzed the combine with some impressive numbers across the board. His endurance results wouldn’t surprise anyone with the way he runs in games, and his speed is also on display when chasing or running from contest to contest. This athleticism to go with his size and work-rate will make him a very versatile player at AFL level, as he has already proven himself at half-back, on the wing, and in the middle and he could easily play as a defensive forward with all his traits coming to the fold. It’s likely he will be used as a tagger early in his career with his running power and competitiveness at a strong level already. With his ability to also play down back, he can follow his man if he is rested forward.

O’Driscoll’s move from defence to midfield has been successful and while he has transferred the defensive traits he learnt into his midfield craft, it is the attacking side that he still needs to work on. Although he can push forward using his strong endurance, his finishing at goal still needs work as he can lack some composure. O’Driscoll tested well at the combine for speed and agility, but he doesn’t really use those tools when in possession as he doesn’t really burn off his opponents with the ball and can get caught when taking a little while to get going.

Because he doesn’t fully unleash his speed/agility, he tends to favour the release handball at stoppages and although that is still a trait required for midfielders, he also needs to find the balance of winning the ball himself and really bursting from the stoppage and using his long kicking to really cause damage as the likes of Patrick Dangerfield do. To reiterate, he has the tools required to become that player, but just needs to work at showing those traits out on the field

Despite not having the attacking flair of other midfielders in this draft, O’Driscoll stands out with what he does without the ball; with his tackling pressure and ability to run up and down the ground invaluable in today’s game. His growth spurt and versatility gives clubs plenty of options to use him in and he has the athletic traits to make the most out of any role a club would require from him. His draft range is up in the air and it will come down to clubs preferring a more attacking or defensive midfielder. If O’Driscoll can find a balance between the two, he will surely reward the club that picks him up.