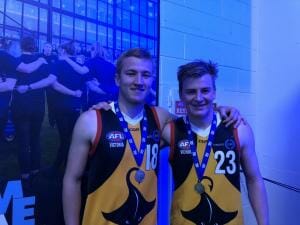 SUMMARY: Mitch Riordan would love to have 2018 again after his year –  including his National Under 18 Championships campaign – was affected by injury. Returning to the Stingrays late in the year, Riordan joined Sam Fletcher as vital inclusions on the inside, and the team looked even stronger. He is one of those players that seems to have a lot of strengths but you do not always notice his output. He is always at the coalface winning the contested ball, and has the strength, speed and endurance to wear down his opponents. He also has a really strong vertical jump, allowing him to play forward if needed. His durability might be a concern, and he could also lift his ball-winning numbers, but in terms of his athleticism and inside ability, Riordan was another player who could be considered unlucky to miss out on a National Draft Combine invite.