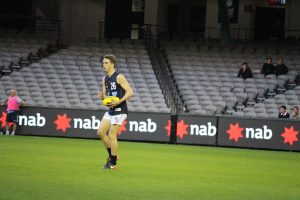 DRAFT ANALYSIS: "A third tall rebounding defender who has has great agility and a really realiable kick."

SUMMARY: Having been overlooked in his top age year, Podhajski has taken full advantage of being invited back to the Calder set-up, adding strings to his bow that were knocks on him previously. With a move into the midfield, Podhajski has soared in his contested ball output, winning almost 10 contested possessions, 3.2 clearances and 6.8 tackles per TAC Cup game. His previous strengths remain though, putting in a very good agility score at the Victorian State Combine, still accumulating a good amount of possessions and marking well in the TAC Cup. His average of 5.7 marks in the TAC Cup have also come in the forward half at times, with the versatile prospect using his frame to good use in doubling as a second tall at both ends, while also hitting the scoreboard. His all-round game also attracted interest from VFL side Coburg, pulling on the Lions jumper seven times this year to good effect, transitioning seamlessly into competition against mature bodies. One of the few area he may look to improve on is his endurance, as he would fit the mould of a big-bodied midfielder at the next level. It is by no means bad, but could be better if he is to play out full games from the middle of the ground. His speed is also an area of improvement, but not of huge concern given he is still about average in the area.