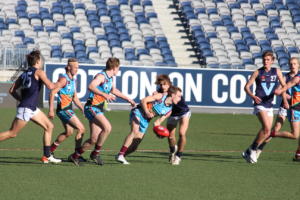 DRAFT ANALYSIS: "A skilful ball user off half-back or through the midfield, O'Neill is still lightly built and needs a clean run injury-free."

MITCH O’Neill is the leading top prospect out of Tasmania this year after an impressive bottom-age year, where he was All-Australian. He’s had his fair share of injuries over the past few years but there’s no denying his talent. He plays his best footy on the outside of the contest where he can use his neat skills by foot and running ability to hurt the opposition. O’Neill is lightly built at just 176cm and 72kg, but the midfielder can definitely win his own ball when required, giving him a good mixture of both outside and inside ball-winning capabilities. He was pretty impressive throughout the NAB U18 Championships, averaging over 20 disposals and five marks per game, splitting his time between the wing and across half-back. His season was cut after the championships with another injury and he would go on to miss the National Draft Combine as well. However, his draft range should not be impacted too much.

O’Neill is a similar player to Zach Merrett, where his best attributes are best utilised on the outside of the contest. He is very neat by foot and he is a very good decision maker – whether he is under pressure or not – and showed in the Allies’ game against Western Australia that he can take the game on with some penetrating kicks from bursting runs down the middle of the ground. He is exactly the type of player you want to have ball in hand as much as possible, especially when directing the ball inside 50 to leading forwards. O’Neill can also win the pill on the inside and is not afraid to put his head over the ball to win first possession in tight situations. He is clean by hand and has fantastic vision, so he is able to distribute the ball effectively to his teammates who are playing on the outside. O’Neill also has the potential to rack up huge numbers on the stat sheet, which was evident in Tasmania’s Round 3 victory over the NT Thunder in the NAB League when he gathered 35 disposals (21 kicks). It Is also worth noting that he spent the majority of the second half of that match on the pine after receiving a head knock.

However, O’Neill still lacks the consistency to perform week in week out given his unlucky run with injuries, in particular a niggling ankle. He may still be a handy contributor in every match he plays, but he’ll definitely be looking to have more of a damaging impact on games on a regular basis once he can build his match fitness and get a clean run at it again. Another area of improvement would be his ability to push forward to hit the scoreboard. If he is wanting to play predominately on the outside (wing) at the next level, he will be needing to add another dimension to his game and goal-scoring will be one thing he will be eager to work on. He finished with just the two goals for the season, which both came in Tasmania’s Round 8 match against the Dandenong Stingrays. O’Neill is still a first-round talent on potential, and was highly rated coming into his draft season as the Devils’ leading prospect. Injuries have set his draft position back a little, so it’ll be interesting to see exactly where he goes come draft night.