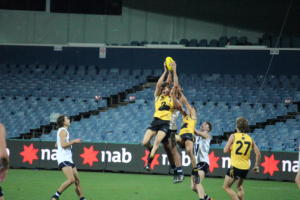 DRAFT ANALYSIS: “A raw tall forward with excellent athletic traits, Georgiades is a smart footballer who knows how to impose himself on games.”

THE son of former Subiaco and Footscray forward John Georgiades, Mitch missed all of the 2019 season due to injury, but his performances as a bottom-ager saw him earn an invitation to the National Draft Combine. At his best, Georgiades is a marking tall forward with an excellent set shot routine. Despite not playing a game in 2019 due to a severely corked quad, Georgiades remains one of the better prospects coming out of Western Australia, after a sensational year as a bottom-ager.

At his best, Georgiades is a tall forward who is similar to Hawthorn’s Jack Gunston. Like Gunston, Georgiades has a good football brain – knowing when and where to lead, makes good decisions with ball in hand – is skilful, strong overhead and is an accurate shot for goal.
Georgiades is also seen as a respected leader amongst his peers. Had he not been injured this year, it would most likely have been a member of both Subiaco’s and the West Australian Under 18’s leadership groups. It is worth noting though that Georgiades will need to put on a few kilograms if he is to match the opposing key defenders in the AFL. Some recruiters also see him as quite raw and before his injury were hoping to see him elevate his game this year. Despite this, once Georgiades is in an AFL environment, his development – in terms of his body and game – will significantly improve. The other improvement Georgiades can make to his game is his defensive pressure. Despite having elite athletic traits such as speed, he did not lay a tackle in six games for Subiaco last year and laid just the six tackles in four games at the National Under-18 Championships. Without any matchday data this year, it is hard to compare over a long period of time, but can always improve. Overall, the high-flying talented forward could go anywhere from pick 30 onwards, more likely mid-draft with clubs playing it safe.