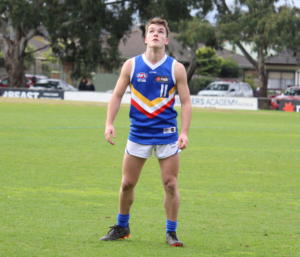 ONE of the most consistent players in the NAB League, Mellis is one of those types that had he been 10cm taller, he would be right up there in draft conversations. He ticks most boxes across a lot of areas, and while he is an outside player, he can play as a small forward and runs hard throughout games. He wants to build his inside game, having averaged the equal fifth most handball receives per game (10.0). Much of his game was based around spreading from the contest despite his 4.9 clearance average, using his speed and agility to break forward and chain possessions together, with help from Eastern extractors Zak Pretty and Lachlan Stapleton. His exceptional work rate allowed him to also get forward and boot 10 goals in 13 NAB League games, while also spending time there during two Vic Metro outings. His size suggests he may be limited to that small forward role early at the next level, but his ball finding ways and neat disposal point toward the potential to return to roles further afield in future.