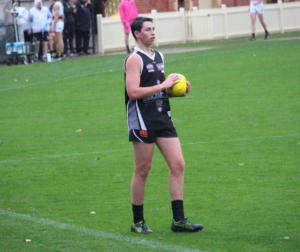 A little bit surprising to see Martin not with at least a State Draft Combine invite, the midfielder/forward has some serious upside if he can iron out his inconsistency. As a midfielder he has shown some signs, but he is far more damaging as a forward with great athletic traits and nous for goals. With his footy smarts and ability to regularly hit the scoreboard, he will surely earn some consideration. In 14 games this year, Martin booted 18 goals and did enough to represent Vic Country twice – booting four goals at the AFL Under-18 Championships. For the Rebels, Martin averaged 17.7 disposals, 3.6 marks and 3.7 tackles showing he has a nice balance between offensive and defensive tendencies. His endurance could improve further which would no doubt improve his overall four quarter consistency, but Martin is the type of player who can win a game in a quarter with a few quick goals.