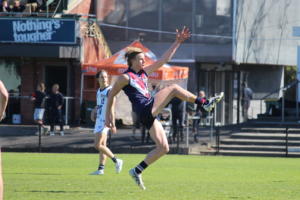 DRAFT ANALYSIS: “A first round bolter, Bergman could land as a top 10 selection on the back of his enormous upside and eye-catching traits.”

BOLTERS are part and parcel of each year’s draft and Miles Bergman finds himself fitting that bill in 2019. A confidence player, Bergman has grown into his top-age season to become a lock as one of Sandringham’s first three players to be taken off the board come draft time on the back of a serious highlight reel. Athleticism, power, high marking and goals from range are the things that have seen Bergman draw into the first round conversation, with his ability to take games over slowly becoming apparent. The wingman/half-forward also proved a match-winner this year, relieving late pressure in the Herald Sun Shield Grand Final with a sensational pack mark to help St Bede’s scrape home on his way to best afield honours. Bergman’s enormous upside is undeniable, with all of his best traits desirable to clubs across the board.

It is hard to miss Bergman in full flight, with his rare abilities making him one of the more eye-catching prospects at the top end. He is the player who Sandringham and St Bedes looked toward to provide a spark or break the game open given the damage he can do forward of centre. Much of that comes down to his penetrating kick, which makes Bergman a player who has few disposals, but disposals which count. He often kicks on the end of short bursts through traffic, longer runs down the line or strong marks overhead, gaining massive meterage and giving those further afield quick sight of the ball. If one passage best typifies Bergman’s traits, it came in the first term of Sandringham’s preliminary final loss to Oakleigh where he marked strongly from behind between three opponents and roosted home a shot from just beyond the arc. His attack on the ball in that bit of play was terrific, and could also be seen in his 11-disposal performance for Vic Metro against the Allies where his aerial ability really came to the fore in small glimpses. That attack on the ball, combined with his underrated tackling means Bergman is much more than a flashy outside mover with a bag of tricks.

For all the frills and moments which stick in the mind, there are also periods of games where Bergman is a lot less influential on the contest. While the areas of consistency and accumulation were ones which he improved on across the year, his NAB League disposal high of 19 is by no means outstanding for a player who spends so much time up the ground. He admittedly is not the kind of player to just rack up the numbers, but just imagine the impact he could have with over 20 disposals – it is a frightening proposition. His 18 disposals, eight marks and four goals against Geelong made that Wildcard Round performance arguably his best for the year, and is probably more the kind of game we can expect from him at the next level. As he moves into the elite system, maintaining his confidence and maintaining his steep rate of improvement will be key to his success. Expect to see him star at the National Draft Combine after missing pre-season testing this year.