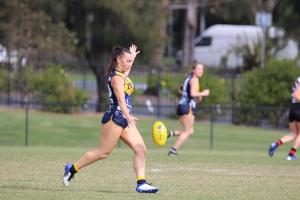 Mikayla Pauga is a natural footballer with clean hands and plenty of class with nice skills and clever at ground level, and traits that are eye-catching in whatever position she is utilised in. Whilst predominantly a high half-forward, once Pauga is able to build her endurance, she can use her impressive traits to advantage for longer in the midfield.

Mikayla Pauga is a player one would describe as a “natural footballer” with her ability to find the ball, use it well and just know what to do, and when. Whilst she has identified endurance as her key improvement for the future, Pauga is a player who has plenty of time to still develop that, with an excellent foundation base from which to work with for the future.

Hailing from the Brisbane Lions Academy but she relocated to the Gold Coast after earning a Riewoldt Family AFL Excellence Scholarship from Bond University, to help with her Bachelor of Psychological Science studies. Also a member of the AFL Women’s Academy, Pauga traditionally plays as a high half-forward who can roll into the midfield and have an impact in stints, but will be something she will eye off doing more often once she has increased her tank further.

In terms of her upside, Pauga is so clean at ground level and with ball-in-hand, knowing how to flick it off with lightning reflexes before being tackled, and has the game sense to know when to move and when to hold up play. She has a nice burst that suits her game once she can get goal side, and she can hit the scoreboard.

Her kicking technique is just as good and she has no problems hitting targets with good decision making over multiple distances, and has improved over the past few years across the board. Making the move from Maroochydore to Bond University, Pauga has overcome injuries that plagued her including a couple of spinal fractures, and has put out some outstanding performances in the QAFL Women’s. Pauga is definitely an exciting talent for the future and one who has a bright future in Queensland.

“I think she’s a really natural footballer. Relocated on a sponsorship to Bond Uni. I think she’s right she just needs to get fitter. But she can play, she’s a natural, she’s pretty clean, good game sense, probably plays more like that high half-forward at the moment.” – Mark Browning, Queensland Female Talent Manager

“It was a bit difficult, I had two quite similar injuries six months apart so it was just working that fitness back up and the mindset mentality back was a bit hard, but I feel like I’ve come a long way since then so it doesn’t really bother me now.” – Mikayla Pauga via “Pauga overcomes injuries and adapts to change ahead of AFLW Draft”

“I think I play like a small forward, so I’m close to the ground and pick up the crumbs a little bit and just little explosion plays I’d say. “I’d like to be able to run around a little more, and just reading the play.” – Mikayla Pauga via “Pauga overcomes injuries and adapts to change ahead of AFLW Draft”

“It might be considered a stretch at 161cm to call Pauga a medium forward, but her traits – such as her strength in the air and ability to be a focal point in transition – allow her to play taller than she is. Capable of going into the midfield and having an impact, Pauga is most damaging as a high half-forward, used as a link-up player to get the ball inside 50. Now at Bond University having come from Maroochydore, the Brisbane Lions Academy member has enjoyed a great QAFL Women’s season, and is a classy ball user. The work she does off the ball is just as impressive, but her clean hands – and ability to dish off in a split second – are what can create plays and scoring opportunities and why she is a member of the AFLW Academy.” – Peter Williams via “2021 AFLW Draft Positional Analysis: Tall/Medium Forwards”