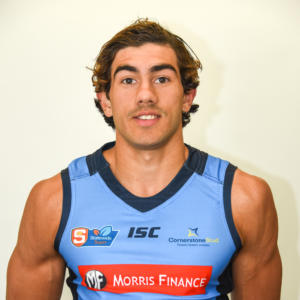 AFTER playing multiple roles for South Australia last year at the National Under-18 Championships, Lochowiak became a consistent forward in 2019, booting 43.20 for Sturt’s Reserves side in a big year – including a bag of nine shortly after a two-game stint at League level. He averaged 12.8 disposals and 4.1 marks per game in the team which he has featured in across three seasons, but the potential impact he has on games extends further than those stats. Lochowiak is only newly deemed a mature-age prospect having missed out on being drafted in his Under-18 year, but is built as well as any over-age player looking to break into the AFL system and can offer real power in a range of positions. But having found his range as a medium forward, that may well be his best position in the future.