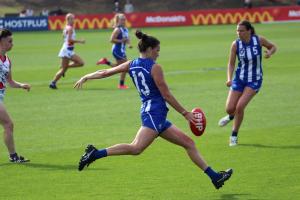 Meagan Kiely has been arguably the most dominant VFLW player this season, leading a number of statistics from disposals to marks, and putting her hand up into draft contention.

If there was picture accompanying the definition of consistency in the dictionary, it may well show an action shot of Meagan Kiely running around in the blue and white hoops. Having relocated to Victoria, Kiely has put together an enormous 2021 season in the VFL Women’s, with numbers that force clubs to take a look at the talented mature-age midfielder.

Turning 27 in December, Kiely is a readymade talent who could easily step up to the AFLW, looking a class above the state league level with her natural ball-winning, work rate and leadership coming to the fore. In 14 games, Kiely averaged 24.5 disposals, 5.3 marks, 5.4 tackles, 3.6 clearances, 3.2 inside 50s and 3,2 rebound 50s in an all-round effort.

Playing onball primarily, Kiely was able to work her opponent over across the ground and use her kick-first mentality (73 per cent of her disposals were kicks) to drive the ball forward for the Roos. A two-way runner, the one way Kiely can take her game to another level is hitting the scoreboard, booting just the two goals for the season. Her overall consistency across the ground, particularly on the inside was noticeable, and captaining the Roos with so much talent around her was a nod to her leadership skills.

Whilst she might have a few years on many of the other draft-eligible talents, Kiely should be highly considered, especially for a side that could use an immediate midfield fix. She cracks in, wins the hard ball, can win the loose ball and puts the team first, hardly putting a foot wrong all season.

There might not be as many chances for mature-age prospects as there were a few years ago, but Kiely is one who should be near the top of the list based on her 2021 season.

“First quarter we saw Kiely with some real leather poisoning when she gets the quick handball to the right side of who boots it into their 50m in the first 15 seconds of the game with a beautiful delivery to teammate Elisha King. With a lot of the ball early, Kiely held her space nicely and lead into space that resulted as a mark, continuing with a quick penetrated kick inside their 50m again and hit teammate, Nikki Wallace up, that viciously resulted in their first goal of the game with a hard direct kick to Sarah Skinner. Holding her space early around stoppages wanting the backwards pass, that results in a run and carry. Five minutes into the first quarter Kiely lays a very important tackle for North where it becomes a ball up inside their 50 for another chance on goal. She used her powerful legs to burst through a pack to fight to put another score on the board that was touched and was a behind. Really good footy smarts when she received the ball from the middle and straight away looked to her right side to use her winger to try to create more space.” – Brooke Hards via “2021 VFLW Player Focus: Meagan Kiely”

“The first mature-ager and VFLW player to make it into the Power Rankings, Kiely would have to be one of the favourites for the Lambert-Pearce Medal after a dominant display for North Melbourne this season. Relocating from Tasmania, the Roos would be keeping a close eye on the 26-year-old, who could slot straight into any midfield with her natural ball-winning skills, work rate and leadership. As good as any readymade midfielder outside the AFLW, the North captain has lead the competition across disposals and marks this year, showing she can win it at the coal face, or on the outside, with her clean hands and kicking impressive, but most of all her footy IQ shining through. Averaging a massive 22.8 disposals, 4.7 marks and 5.6 tackles from her 12 games, she is the premier VFLW player at this stage.” – Peter Williams via “Draft Central AFLW Draft Power Rankings – Victorian Pool: June 2021”

“Meagan Kiely‘s our captain, she’s had a fantastic year, I think she leads the comp in disposals, marks and a few other statistics, and she’s probably been our most consistent player across the course of the year, and played a few different roles for us as well, so she’s been pretty significant… Meagan Kiely’s a great example of a player that I think has been able to put so many runs on the board this year that she would be a consideration for a number of clubs I would suspect.” – Rhys Harwood, North Melbourne AFLW List Manager via “Exciting Eleven: North Melbourne’s VFLW Tasmanian connection strong”