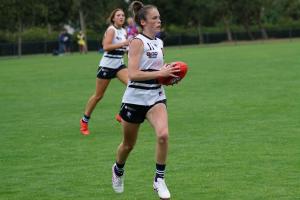 A flying winger with serious speed and hurt factor, Appleby has often proven an irresistible attacking threat across her junior career. The AFLW Academy member was part of the Northern Knights 2019 NAB League premiership side at just 16 years old, waxing with a bunch of stars who have gone on to make names for themselves at the top level. Appleby has made the wing her own over the years, also able to use her line-breaking ability off half-back while producing some true highlight reel moments in most outings. She earned Vic Metro representative honours once again in 2021 and has been invited to the AFLW Draft Combine.

Appleby’s strengths become immediately apparent each time she has ball in hand. She is a type whose athleticism shines through both in testing and on the field, with her top 10 20m sprint time during preseason testing translating to some serious run-and-carry. The Northern Knights standout can often be seen taking three or four running bounces along the wing, before unleashing a long kick inside 50 or even on goal.

With plenty of her work done at speed, Appleby would perhaps be forgiven for being a touch less effective in her disposal. But she has proven to be a quick thinker and apt decision maker in possession, adding a touch of class to her electric bursts on the outer. Her kicks are also quite penetrative at times, able to pump the ball long down the line or deep inside attacking 50.

While she certainly hurts the opposition with high impact in each disposal, the Vic Metro representative can work on doing so more often. She was touted for more minutes on the inside this season, which would have boosted her 9.5 disposal average in the NAB League, but looks a touch more comfortable when unleashed in space on the outer. In her own words, Appleby was also seeking to improve her second, third, and fourth efforts to get to as many contests as possible while developing that midfield craft.

Her upside remains high, credit to eye-catching athletic traits and the knack for making exciting things happen in a flash. Clubs obviously value her speed and potential having nominated her for AFLW Academy and Draft Combine honours, and there is plenty of development left for Appleby as she strives to continue Northern’s legacy of producing high-level AFLW talent.

“She moves well, uses the ball well and really hurts the opposition when she gets it. If she begins to get it more consistently, then she will be an even bigger threat, but on the outside, Appleby has strong hands and can impact playing off a wing.” – Peter Williams via “Draft Central AFLW Draft Power Rankings – Victorian Pool”

“Appleby has managed to catch the eye on more than a few occasions over the past few seasons despite playing in such a stacked team at the Northern Knights… she is is one that teammates want to get the ball in the hands of in order to create scoring opportunities up the field.” – Peter Williams via “2021 AFLW U18s Ones to Watch”

“Maykayla Appleby‘s in the AFLW national academy; she’s an 18-year-old, a really smart ball user who had played previously outside mid. Obviously with Ellie (McKenzie) and Fitzy (Jess Fitzgerald) in particular in the midfield last year, we’re looking at different players this year to step up and take that opportunity to take their game to the next level.” – Nat Grindal, Northern Knights talent operations lead.