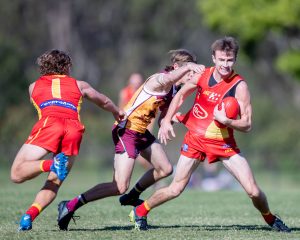 DRAFT ANALYSIS: “Pescud is a dangerous medium forward who can hurt opposition defenders in the air or at ground level with a keen eye for goals.” – Peter Williams

Max Pescud is one of the more unique AFL Draft prospects from this year’s AFL Draft Combine invitees, as a medium forward who plays taller than he is, and has pieced together some superb form in the QAFL season. Kicking 15 goals in six games, Pescud did his draft chances no harm with some consistent bags and a couple of impressive outings in the Academy Series games against Brisbane Lions.

The Gold Coast Suns Academy member looms as a later prospect in the draft, and could provide value for those looking for a smart forward who has no trouble hitting the scoreboard, should the Suns not opt to pre-list him. In terms of his athletic strengths, Pescud is quick off the mark and has a big tank that helps him run out games and wear down defenders. In time, he can spend more time in the midfield – and did so at times for the Suns in those Academy games – but still has some other areas to work on.

For Pescud, one of the biggest things is his strength. Weighing in at just 68kg, he is still quite lightly built, and while he can breakthrough the stratosphere by sitting on someone’s shoulders, he can get knocked off the ball at ground level. Where Pescud thrives is in time and space, or on a head while sitting up for a screamer. His ability to not only know where the goals are, but to hit them consistently never comes into question.

In his standout game this year, he slotted half a dozen goals against Wilston Grange in a match-winning performance for Surfers Paradise – and kicked five behinds as well, showing just how big of a performance it could have been. But that lends into his other major improvement which is his decision making, particularly inside 50. Like any goalsneak, Pescud said in preseason he is working on his vision and distribution inside 50 to teammates in better positions. At times he can blaze away and go for goal of the year or take shots that are low percentage.

While he has that licence to takes his chances at QAFL level, Pescud will need to continue to work on that area of his game and turn those five behinds into potentially a couple of goals for teammates. As a whole though, it is promising to see the confidence Pescud has in his own ability and he is never shy to let an opponent know when he has kicked a few on him.

At this stage Pescud is more of a later rookie chance with Gold Coast having a couple of top 30 prospects automatically to add to the list in Alex Davies and Joel Jeffrey and then a host of others vying for spots on lists. As we saw with Noah Cumberland and Will Martyn last year, being linked to an Academy can give you opportunities outside that AFL-aligned club and Pescud did his chances no harm this season and no doubt some non-Queensland clubs might be weighing up his services.