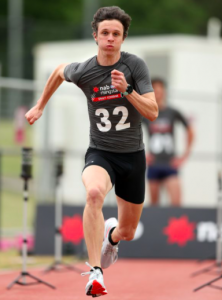 DRAFT ANALYSIS: “Holmes is an outside midfielder with high-level athletics pedigree, and has shown a steep rate of development to race into draft contention.” – Michael Alvaro

Max Holmes has bolted into AFL Draft contention, despite such a small sample size shown for his talents thus far. The 18-year-old is the son of Commonwealth Games gold medallist, Lee Naylor and had previously pursued an athletics career, but the lure of football had him commit to the team game and those at Sandringham are high on his potential. In his lone NAB League outing as a bottom-ager, Holmes gathered 15 disposals and took four marks, but a broken arm kept him on the sidelines for most of 2019. He sustained the injury while playing for Melbourne Grammar in the APS Football competition, where he had shown plenty of promise across a full season in 2018. A 17-disposal preseason trial game this year and outstanding testing results only further catapulted the midfielder onto the radar of AFL clubs, providing a glimpse into the great upside Holmes brings as a project player for the future.

Possessing ‘AFL traits’ is a requirement for those hoping to make it at the elite footballing level and for Holmes, those prerequisites largely come via his athleticism. The former Under 18 National 400-metre hurdles champion and keen sprinter obviously has pace to burn on the track, making for a handy starting point in terms of high-level attributes. He recently notched a 2.80-second 20-metre sprint time at the Vic Metro Draft Combine, only confirming his strength in that area. Combined with his endurance, Holmes is able to get to contest after contest and gain good separation from his opponent on the outer.

In his sole NAB League appearance last year, Holmes utilised these strengths while stationed at half-forward, as the likes of Jake Bowey and Angus Hanrahan took up wing positions. He was able to present well up the ground and was constantly positioned well on the periphery of packs, waiting for a releasing handball or the opportunity to move forward. His anticipation in those situations was sound, following the ball well and sensing when his opportunity would come. Holmes also has relatively clean hands; used to either mark overhead at 189cm, or to gather ground balls and move the ball on swiftly.

While his outside game is quite promising, Holmes is still quite raw in term of his overall footballing development. The Dragons product has only really been a full-time figure in the elite talent pathways for a year, so will only benefit from more time in the system as he develops. He is also quite raw in terms of his physical figure, but has grown four centimetres and put on the same amount of kilos since last year.

Still, Holmes remains that lean running type who covers the ground well and can utilise his best assets in a range of roles. But while he looks a prototypical outside runner, his endurance and cleanliness could also be used while playing as a high half-forward, or even as a running half-back. Given his height and turn of speed, it would also have been interesting to see him tried on the inside. As far as high-upside prospects go, Holmes is certainly one of them and will just have to add the footballing nous to his athletic profile to prove his standing as an elite level footballer. Potential goes a long way in recruiters’ eyes, so he may well get his this year, or in years to come having been robbed of a top-age season.

Holmes remains a rookie-type prospect and fits that bill perfectly as a player who still has plenty of development left in him. Clubs keen on his athleticism and upside could see him as a project player who proves too hard to refuse, but others will want to see him run out a full season at NAB League or state league level. Should his chance not come this year, Holmes looks likely to be given ample opportunity to prove his worth at a good standard of competition, so should remain on the radar. His experience and pedigree in high performance sports should also bode well for a smooth transition into meeting AFL standards, which is an important box to tick.