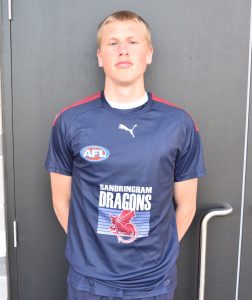 DRAFT ANALYSIS: “A potential draft bolter, Heath is a strong ruckman/key forward who loves to throw his weight around, and competes well both around the ground and in the air.” – Ed Pascoe

Heath has seemingly come out of nowhere to become a genuine draft chance in 2020. Standing at an impressive 203cm, the Xavier College and Sandringham Dragons prospect wasn’t on the radar last year; playing only a single game for Sandringham and collecting a lowly four disposals, seven hit-outs, and one goal in Round 9 against Gippsland. It wasn’t much of a surprise to see him miss out on the original AFL Academy intake, but a standout performance in the pre-season against Oakleigh Chargers put him firmly in recruiters’ sights. With that brilliant display, he earned selection for the AFL Draft Combine, but the Covid situation has certainly hampered his progress this year as he would have also gotten the opportunity to be Victoria Metro’s leading ruckman, competing against the likes of Kalin Lane, Shannon Neale, Riley Thilthorpe and Henry Walsh of the other regions.

The main thing that caught the eye with Heath at the start of the year was his competitiveness. Standing out like a beacon at 203cm and with the blonde hair, it was enough to catch the eye in and of itself, but his impact around the ground was really outstanding. Heath threw himself into every ruck stoppage and if he wasn’t winning the hit-out, he was following up with a crunching tackle or gathering the ball himself and throwing his weight around. He still has a lot of size to put on his frame but the way he played, you would have thought he was 100kg-plus given all the hardness and confidence he showed.

The tackling he provides is fantastic and can really help the midfield brigade. Even if he isn’t tackling, he is smart enough to use his frame to block for his midfielders. Heath’s skills for a ruckman were also impressive considering most ‘rough and tumble’ ruckman usually lack that finesse, but Heath rarely missed by hand and foot with his only big blemish a poor shot on goal. You can trust Heath in general play and around the ground to hit his targets as he also makes smart and composed decisions with the ball.

Heath is also an aerial force around the ground as he attacks the ball hard and if he isn’t taking the mark, he is at least giving a contest to get the ball to ground. He is more than capable of going forward and being a very good option, with good leading patterns when forward and a surprisingly nimble step on the lead. Given his size, he is undeniably a hard player to spoil, too. With this added confidence and size, and the fact he only just turned 18 in October, he has plenty of development and upside. He already plays stronger than his current weight and he could be a real force once he puts on another 10kg in an elite environment.

Heath’s endurance is certainly an area of improvement he will need to work on to match endurance beasts like Brodie Grundy at the next level. Modern rucks can ruck all day and although Heath can rest forward, it would be required he gets his endurance to a strong level to make him a more complete and potentially dominant ruckman. Heath didn’t set the world on fire last year with his production but he is a far improved player, despite not being able to show that improvement on a consistent basis due to the cancelled football in Victoria. It is unfortunate that he hasn’t been able to show his talent over the course of a full season, so clubs will be relying on very little game time to rate Heath against the rest of the draft crop.

DRAFT PROJECTION: Late-Second to Third Round

Even with little game time this year, Heath has caught the attention of recruiters. At 203cm and with the ability to go forward, he could have really climbed up draft boards this year. There is uncertainty on Heath having only the one standout game in 2020, but his selection for the AFL Draft Combine despite that shows how highly he is rated. Clubs may want to wait another year to see how he goes but it also wouldn’t surprise to see him taken early just to back in his talent and get him on a list as quickly as possible.