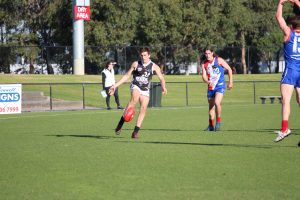 SUMMARY: Matty Lloyd is a natural accumulator who constantly gets to positions where he can receive the ball and run off down the field. He averaged five rebounds per game and his trademark run-and-carry was often on show when kicking out from full-back and immediately getting forward. He positioned himself behind the football in the hole and would find space around the ground to continue finding the ball. Athletically he is behind others, and his contested work and kicking consistency are areas that need work – with a 16 per cent kick clanger percentage yet just 20.2 per cent of his possessions were in a contest. Much like his brother, Sydney’s Jake, Matty Lloyd provides his value in run and carry and outside movement, and has no trouble winning the ball in all thirds of the ground. He is a player who will likely slot into a half-back flank as a ball carrier and create forward thrusts starting in the defensive half.