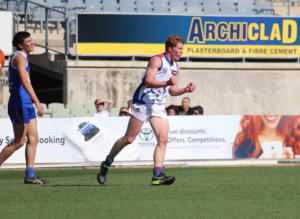 DRAFT ANALYSIS: "Rowell is the standout prospect in this year's draft and is all but signed, sealed and delivered to the Gold Coast with Pick 1."

THE most talked about prospect in this year’s AFL Draft, there is not too much you can say about Matt Rowell that has not already been said. Similar to Sam Walsh last year, even picking out areas of improvement is a pedantic and arduous task. Rowell genuinely has no clear deficiency that impacts his game, with the two areas he could improve being scoreboard impact and versatility. His list of strengths however could go on and on with his consistency unbelievable and enviable of any other player, while his disposal, contested work, clearances and tackling is all up high in his repertoire as a player. Whilst finding his improvements might be difficult, his draft range of pick one is the easiest of any player, and Gold Coast SUNS have a real player on their hands here.

Rowell’s honour roll of awards is something almost unheard of, with two Under-18 Grand Final Best on Grounds, as well as the top player in the Under-17 Futures game at the MCG last year, Vic Metro’s Best and Fairest, Oakleigh Chargers’ Best and Fairest and All-Australian honours this year. He has not played a bad game all year, earning full votes in his four games in the NAB League regular season and finishing on 12 votes in the Morrish Medal to finish sixth. When analysing his game it is not hard to see what the fuss is about. Playing on the inside, the 178cm midfielder plays with a fierce competitiveness and defensive attitude to just win the ball either himself, or back off the opposition. His hardball gets are through the roof much like his contested possessions, winning the ball at ground level and shovelling it out to teammates. His disposal is among the best, and while he might not have that elite kick that some others have, he hits his targets more often than not and just when you think he might not have an overly penetrating kick – 85 per cent of his kicks are short – he nails a goal from 60m on his non-preferred in the NAB League Grand Final. When you kick that long on your non-preferred, there is no such thing as “non-preferred”. It is more the fact that with Rowell, he racks up so much hardball on the inside – he had 16 hardball gets in the Grand Final with the next highest player having five – you often see him handballing out to a teammate rather than getting the chance to kick.

The two goals he booted in the Grand Final are a rarity in his game as he generally sets up teammates rather than go for goal himself, though he booted three goals from four games for Vic Metro at the Under-18 Championships. For Oakleigh, Rowell booted just the one goal in six matches heading into the Grand Final and as a bottom-ager managed just three from 11, so adding more goals to his name and getting forward on the end of plays is an area of improvement. This leads into the fact he could build his versatility as another developmental improvement. He is such a dominant inside midfielder, but moving back out to a wing or half-forward at senior level could add more strings to his bow. But again, these are not areas that are particularly detrimental to the role he plays on the inside. His defensive pressure through tackling, his inside midfield ability and his consistency are areas that are rarely matched by others, and you can pencil him in for Round 1 next year if fit. He has the tank to have an impact from the start of his career, and is solid across the other athletic areas.