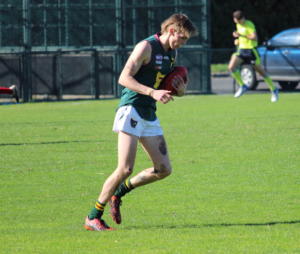 A talented utility, McGuinness could not have done much more for Tasmania Devils in the NAB League Boys competition this year. He was unlucky not to make the Allies side as an overager, but put together a really consistent year with his intercept marking, versatility and composure under pressure among his key strengths. Must build more size on his frame, but possesses an elite vertical leap, recording 89cm on the running vertical jump at the State Draft Combine. In doing so, McGuinness turned an area of improvement (he recorded just 72cm at the Rookie Me Combine 12 months ago) into a strength and added an extra string to his bow. The fact McGuinness can play at either end is a massive benefit, but it is his ability to win the ball and penetrate defensive zones coming off half-back with the bulk of his disposals coming from marks where he is perched back inside defensive 50 and provides a reliable head there. He still has some great athletic capabilities with a 3.03-second 20m sprint, but his endurance is a massive area of improvement, recording just 19.4 at the combine.