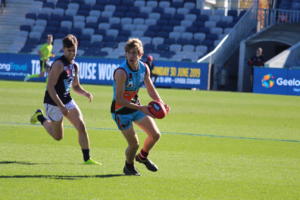 THE GWS GIANTS Academy member showed throughout the Academy Series that he is capable of playing either inside or outside, and while he is not a massive accumulator, he can get free and move the ball inside 50 well. He averaged five tackles per game in the Academy Series to accompany his 19.4 disposals, showing he adds a defensive element as well as his offensive attributes. At the Rookie Me Draft Combine, McGrory was unable to test due to injury, but when he completed testing with the GIANTS last year, showed off his elite endurance (21.5 on the yo-yo test) and speed (2.87 seconds) mix, as well as a strong vertical leap. At 188cm, McGrory is a good size to develop and once he can iron out some of his decision making and influence the scoreboard more often, he will be an even more valuable contributor.

DRAFT CENTRAL’S INTERVIEW WITH MATT MCGRORY AT THE 2019 ROOKIE ME DRAFT COMBINE: