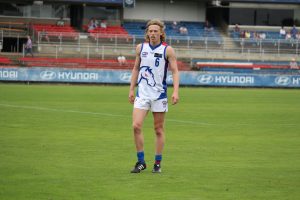 DRAFT ANALYSIS: "A relative newcomer to the elite football system, Matthew Day has impressed with his inside work and speed"

Matthew Day is a prospect who no-one was aware of 12 months ago. He joined the Oakleigh Chargers this season and came on quicker than expected with a number of impressive performances across the 2017 season. The big-bodied 189cm midfielder had a rather remarkable season, averaging 3.6 clearances from just 14 disposals per game. His inside work, which featured more than half of his possessions won in a contest was far ahead of what many would have predicted in effectively his first full season in an elite football program. He has great speed, recording a flat three seconds at the National Combine, and his ceiling is high if developed correctly. He still has to work on his accumulation and build his endurance base further, but he has shown signs of what he can do.

Coming in as a late bloomer, Day showed he was not afraid to throw his weight around for the Chargers on the inside, winning 52 per cent of his possession in a contest. He might have won just 14 disposals, but he made the most of it when he did, making smart decisions by hand or foot and the signs he showed pointed towards a bright future. Day worked hard at the stoppages for little reward considering many others might have received plaudits ahead of him, but with a big frame in that new “prototype midfielder” role, Day would not have lost any admirers as the season went on.

For an inside midfielder his kicking was quite good with his 59 per cent by foot not reflective of his disposal, and given he was mostly entrenched with bodies either side of him, he was often disposing of it under pressure. His quick bursts help him escape opposition clutches and gave recruiters a little taste of what he could produce on a more consistent basis down the track. He still has a fair bit of development to go, but that adds to his future scope considering he has had arguably a couple of years less development in the Chargers’ program compared to other players.

As a raw talent, Day naturally has a number of areas he needs to work on to take his game to the next level. For a midfielder, 14 disposals per game is not enough unless you are tagging, so getting into positions to win more of the football will be a task for Day going forward. Perhaps his defensive running and getting back to help teammates and win the football in the back half could be a way to present to the contest and win another five or more disposals.

Secondly his endurance could still improve which is something that is not a surprise given his reduced exposure in an elite talent system. He took seven minutes and 18 seconds to complete the 2km time trial at the National Combine, the longest time of a Victorian midfielder, finishing just ahead of interstate duo Jack Payne and Adam Sambono, as well as lumbering giants Sam Hayes and Ned Reeves. Based on that, he might be some way off senior football and naturally viewed as a raw project for a club to develop.

Matthew Day has the frame and tenacity to become a full-time inside midfielder at the highest level. He has already learnt a great deal with just 12 months under his belt, but still has plenty to improve on going forward. He is quick off the mark, a good kick and knows how to extract the ball from a stoppage, but he has to find more of the football, run harder defensively and continue to build his endurance to be a real threat on the football field. With plenty of development left in him, expect Day to be a late or rookie prospect from which a club can work with to develop into a valuable inside midfielder.