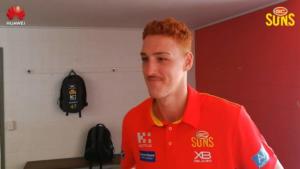 A big body ruck/forward who is just a monster around the ground when it comes to marking contests. The over-ager is by no means a high disposal winner, but plays his role to a tee and can also hit the scoreboard consistently. He seems to have improved on his impact across the game and made the Allies squad, booting three goals in a fruitful outing in the Victorian trials. Despite standing at a bullocking 201cm and 97kg, Conroy is very athletic, clocking up a 3.02-second 20m sprint, 8.52-second agility test and 77cm running vertical leap, which considering he is readymade physically for senior football, is quite impressive. His endurance can still improve, and his knowledge of the game – coming from a rugby background with his brother James a Penrith Panther – is still a work in progress, but it will be interesting to see how he adapts to senior level given he is too big and strong for Under-18 defenders. Remarkably, Conroy has added 12kg to his frame since the start of the year.