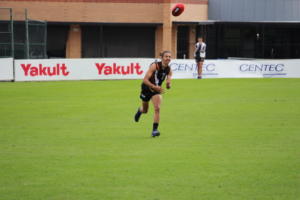 DRAFT ANALYSIS: “Rosas is as classy as they come on the ball, lighting up the forward half with his pace and poise in front of goal.”

MALCOLM ROSAS Jnr is the Top End’s greatest draft hope this year, with the Darwin product one of three Allies representatives this year to hail from the Northern Territory. Having ripped up the NTFL Premier League for Darwin Buffaloes and stood out as early as at Under-16 level for the Thunder Academy, Rosas continued to show glimpses of his potential in small showings during his top-age year. The midfielder/forward went goalless just twice this season across six appearances in the NAB League and national carnival, particularly showing his nous around goal for the Allies to boot two goals against both South Australia and Vic Metro. While ball winning and consistency can be worked on, the raw talent and excitement factor is there for any club willing to take a punt on potential. Given Gold Coast’s draft concessions allow the Suns access to the Darwin zone, Rosas could well find a home at the next level late on in the draft.

Despite his ability to find the ball through midfield, Rosas has all the makings of a classic small forward in the AFL system. His speed on the outside to break the lines is outstanding when starting up on a wing, while also allowing him to find space in dangerous positions when forward. That speed was shown on the national stage in testing too as Rosas posted a 2.924 second 20m sprint time at the National Combine, good for the third-quickest time. Rosas’ goal sense is also terrific, with his class on the run evident during the national championships as he slotted majors on his left side with ease from all positions. Add to that the element of defensive pressure and you have a complete small forward who plays the role as AFL clubs would wish with both sides of the game on lock.

While Rosas’ speed and one-touch play allows him to get the ball moving forward quickly from congestion, he is still very much an outside player as it stands. The things restricting him from more midfield time at the moment are his 178cm/69kg frame, as well as his high uncontested numbers and lack of massive possession accumulation. His hurt factor is high, but he just needs to find the ball more consistently to be able to have a greater impact on the game for four quarters. Still, those moments where he picks up the ball in full stride or makes opponents look silly with a deft turn are what best typify Rosas’ game, and is likely how he will play at the next level. His mix of defensive pressure and class on the ball also bodes well for moves up the field onto a wing or half-back flank, allowing him more avenues into the elite system.