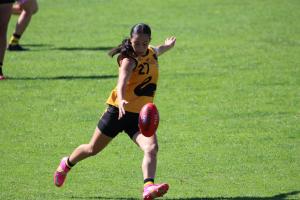 Makaela Tuhakaraina is a raw talent with plenty of eye-catching traits and upside. The South Fremantle prospect has come a long way in a short time since coming from rugby, and whilst her fundamentals can still improve, she has some elite level athleticism and great defensive pressure.

Once you see Makaela Tuhakaraina is action, it is easy to draw the conclusion she has come from a rugby background without even needing to know. Tuhakaraina will win the ball and immediately look to run at full tilt, tucking the ball under arm and not looking back. She is someone who can break the lines and once she gets goalside, is hard to contain with very few players possessing the same amount of elite speed, burst and agility she possesses. Despite standing at just 158cm, Tuhakaraina packs plenty of punch and has strength and power to go with her athletic traits.

Tuhakaraina is still developing her fundamentals, which is natural coming from a different sporting code. At times she can get herself into trouble by running too far or rushing her disposal, but with more development and honing in on when to go and when to slow, Tuhakaraina could become a really damaging talent. She has the traits to be able to burn off any opponents through both acceleration and power, shrugging off would-be tacklers, or sidestepping those in her way. Though she can play through the midfield, she can equally play forward or back, particularly off half-forward where she can receive the ball and race inside 50 to put it to dangerous areas or set her sights on goal.

Overall, Tuhakaraina is a player who can improve dramatically with some tweaks here and there, and from a raw talent base, the Bulldogs player has plenty of notable traits that will hold her in good stead and catch the eye now and into the future.

“A really raw player coming from a rugby background, South Fremantle’s Tuhakaraina is the definition of eye-catching. Possessing elite speed and agility, the talented utility who can play through the midfield but can slot in anywhere including forward, Tuhakaraina is hard to stop when she gets going. A powerful athlete who is still building other areas of her game, she has the tools that clubs can work around and with the development she has already made, it one to keep an eye on. The fact she is sub-160cm will not matter considering her athletic traits and ability to get out of trouble by gaining separation on her opponents.” – Peter Williams via “Ones to Watch: AFLW Draft eligible surprise packets”

“Utilised that blistering pace in the forward half to create a lot of opportunities and exciting moments, with one of those being a goal, and WA’s first, where she ran onto a long kick over the top of a pack, turned on the jets, took a bounce and put it through. Something that was really impressive to see in her game was how good she was at holding the ball up to draw in opponents, waiting until the right time to handball off to a teammate that had less pressure because of her work drawing those opponents in.” – Declan Reeve via “Top Performers: 2021 AFLW U19s Championships – Thursday, April 15”

“As one of the smaller players taking the field, it is no surprise that her agility and work at ground level is a big part of her game, and an advantage on most of her opponents, but it is her breakaway speed that is often paired with the agility that catches the eye more than anything else. It was entertaining to see so often that she would come in from the side to win a ground ball, then burst away and out of the pack to kick long forward to the advantage of teammates.” – Declan Reeve via “Top Performers: 2021 AFLW U19s Championships – Monday, April 12”