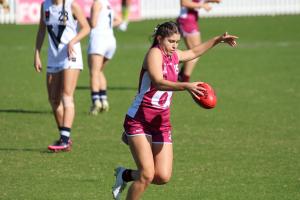 Maggie Harmer is one of the more versatile players who can roll off half-back or along the wing and have an impact inside if required. With great footy IQ and an ability to intercept behind the play, Harmer is an exciting talent.

Maggie Harmer is an exciting Queensland prospect out of Maroochydore and a member of the Brisbane Lions Academy. Harmer is able to read the play out of half-back and set up plays going forward, also pushing up to have an impact along the wing or inside. With her versatility comes her great footy IQ she uses to advantage.

Her aerial skills are where she is able to beat opponents, and whilst she said she would love to improve her one-on-ones further, she often beats opponents through reading it well in flight. Confident going for her marks, Harmer is capable of getting in the hole and clearing the danger from defence, or when she plays on a wing, runs forward to provide some drive in transition.

An improvement for Harmer is her ground balls and being able to beat an opponent at ground level, which will come with time and continued exposure to more senior and experienced players. With plenty of upside for the future, Harmer is anticipated to start at half-back and eventually develop into that running outside midfielder, but could use her athleticism on the inside as well.

She is the type of player that teammates can rely on with ball-in-hand, and once she has it, she will generally use it well going forward. Representing Queensland in the Sunshine State’s clash with Vic Country, Harmer had 15 disposals, five marks and five tackles, showing her equal measure of intercepting and defensive pressure in the back half.

Going forward, it is anticipated that Harmer will be able to slot into a myriad of roles, and with plenty of excitement about her future development throughout the pathway, she is one to watch next year and beyond.

“If you watched her train, she’s probably the one that excites me the most when she trains. It hasn’t quite transpired to games yet, but I think she’s got the most natural running out of all of them.” – Mark Browning, Queensland Female Talent Manager.

“The clever AFL Women’s Academy member is a Brisbane Lions Academy aligned player who has been a reliable talent in defence. Having also showed her wares in the midfield at times, Harmer predominantly is utilised as a rebounding defender who wins her own ball through intercepting opposition forward thrusts. Against Vic Country, Harmer had 15 disposals, five marks and five tackles, one of the shining lights in a big loss for the Sunshine State. Hoping to improve her ground ball work given her ability in the air, Harmer is a talent who knows how to position herself one-on-one in a contest, pull down the ball, then use it well coming out of defence to hit the long kick to an open target. She has the footy smarts to be able to make good decisions under pressure and knows when to go, or when to hold.” – Peter Williams via “AFLW Draft Positional Analysis: Tall/Medium Defenders”

“Making a name for herself as a reliable defender, who plays well above her 170cm height against taller opponents, Harmer is perhaps most well known for her aerial work and clean ball use out of the defensive 50. In the recent Under 19s AFLW National Championships match against Vic Country, she took five marks in the defensive half on her way to getting named in the best, being trusted with kick ins duty for majority of the game.” – Declan Reeve via “QAFLW Player Focus: Maggie Harmer and Bella Smith (Maroochydore/Brisbane Lions Academy)”