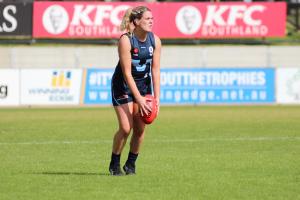 A top-age prospect who was initially overlooked in her draft year, Maeve Chaplin has benefitted greatly from another season at the NAB League level. The 18-year-old was part of the Northern Knights 2019 premiership side and has drawn inspiration from teammates who have since gone on to crack the AFLW grade. Having initially plied her trade across half-back, Chaplin has become a focal point of her region’s midfield over the last two seasons, showcasing terrific ball winning ability on the inside and the strength to power her side forward. While representing Vic Metro, she reverted back to that defensive post with great poise and class, remaining in the draft conversation after earning another AFLW Draft Combine invitation.

Chaplin was consistently among Northern’s best players in 2021, proving a true on-field leader as a key ball winner in midfield. She was incredibly reliable on the inside, able to use her mature frame and experience to thrive in contested situations and set the Knights on the front foot. With the power to break tackles and class to use the ball cleanly, Chaplin’s great quality was her ability to move the game to the outside with efficiency.

While stationed in defence, where Chaplin said in 2020 she is more likely to thrive at the next level, the 18-year-old’s composure really shone through. She arced back to those roots while representing Vic Metro, squeezed out of a stacked midfield but still able to impact the contest. Chaplin showed she could shut down dangerous opposition forwards, while also forcing intercepts with her positioning and reading of the play, before inciting attacks with clean ball handling, shrewd decision making, and efficient use by foot.

Having spent more time on-ball in 2021, Chaplin was made to work hard on her aerobic endurance and can always add outside elements to her arsenal. She has seen a bunch of teammates move on to the next level and has also focused on the mental side of her game, to harness the belief that she belongs in similar conversations. With some VFLW experience under her belt at Carlton, Chaplin has gotten a good feel for what it takes over the years and is the kind of teammate who can do the tough stuff to allow others to shine, too.

“Able to play off half-back as she did in past years, Chaplin did it for Vic Metro, whilst playing the inside ball winner for the Knights. She averaged the 17.3 disposals and 5.0 tackles, with a lot of her possessions coming in close, and then working hard to spread to the outside and thump the ball forward to give her team the advantage.” – Peter Williams via “Draft Central AFLW Draft Power Rankings – Victorian Pool”

“Put in a solid performance in what will be her last NAB League appearance. Chaplin’s strength on the inside and around stoppages are her her standout traits, being able to win contested possession without much issue even with opposition hanging off her. This goes hand in hand with her composure and smooth moving through traffic to make her a really damaging ball winner, where she’ll win it, get free and kick well forward. When playing a role in the defensive 50, she has natural defensive nous, with just little things like standing goal side of her opponent or having an arm across them when the ball comes in.” – Declan Reeve via “Top Performers: 2021 NAB League Girls preliminary finals”

“The top-ager arced back to her roots in a way as she was stationed almost permanently down back for Metro, and was one who stood up well against the efficient Vic Country attack. Her strong physical presence and ability to read the game proved key traits as Chaplin cut off a number of Country forays – whether it was cutting across to intercept mark or rebounding with authority and efficiency. Amid a high stakes pressure cooker, Chaplin was one of the more composed players in important areas and played her role to a t, even doing well to quell the influence of Poppy Schaap after her hot start to proceedings.” – Michael Alvaro via “Top Performers: AFLW U19s Top Performers – Vic Country vs. Vic Metro”

“Maeve Chaplin is going to return this year and play for us which is fantastic. We’re excited for her to have another opportunity to show her skillset at the NAB League level, she was probably one of the really unlucky ones with the season cutting short – she didn’t get a full season to put her best foot forward and to prove herself to recruiters and AFLW clubs.” – Nat Grindal, Northern Knights talent operations lead.

“I definitely tried to use (the 2020 lockdown period) to my advantage and I really worked on myself mentally. It was a big thing for me because I didn’t really have the time like I do now to just focus on myself. It was a time for me to understand that I really do want to get far in footy and that I am prepared to play at a professional level. In order to do that I really wanted to mature in those areas.” – Chaplin, via “Capable Chaplin knows believing is achieving”