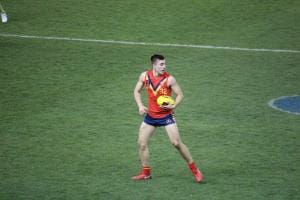 DRAFT ANALYSIS: “A leader beyond his years that will impact as a ready-to-go midfield accumulator.”

South Australia’s Luke Valente was one of star performers in the Croweaters victorious National Under 18 Championship. The tough midfielder led from the front as captain of the side and was integral to South Australia’s superb onball brigade. Valente was crowned South Australia’s Most Valuable Player in the carnival and was also named vice-captain in the Under-18 All-Australian side. Valente was unlucky to miss out as an underager for South Australia in the 2017 championships, but his progression was paramount with his performance in February’s internal trials. Valente’s consistent performances across the carnival showcased his prolific ball winning capabilities and clean disposal by foot and hand. His leadership qualities have been widely admired with South Australia’s success in the championships and will increase his reputation to club recruiters. Valente has been continually challenged on his speed and acceleration from the contest and across the ground, which is an aspect of his game that will be improved with time. Valente solidified himself as one of the top midfielders in this year’s draft pool and will be great get for the club that selects him on draft night.

Luke Valente has been recognisable with his leadership qualities that has been admired across the whole football industry and is unrivaled with anyone in his age group. Valente is one of most natural leaders to grace the National Under 18 Championships in recent times and led an extremely talented South Australian leadership group that contained, Tom Lewis (Sturt), Jez McLennan (Central Districts), Jack Lukosius (Woodville-West Torrens) and Jackson Hately (Central Districts). Valente’s ultra-professionalism has been a constant shining light throughout his journey in football so far. This has been illustrated in Valente as head prefect captain at Rostrevor College and the captain of the First VXIII football team. Valente is able to lead from the front with his superb clearance work and skills to hit targets up forward and find his team-mates through the middle. Valente has been compared to previous South Australian captain and Larke medalist Jack Graham, but throughout the carnival Valente already looks to have stronger kicking and disposal efficiency than the Richmond premiership player at 18.

Another strong facet to Valente’s game is that the South Australian captain can effortlessly kick with either foot which is a rarity among the others in his draft class. With strong disposal efficiency, Valente is able to complement this with a great ability of being able to get to the ball first. The ball winning ability of Valente and his partner Jackson Hately was a joy to behold at times throughout the carnival, as they both recorded multiple 25-plus disposal games throughout SA’s undefeated campaign. Valente was superb in the tight win against the Allies at the GMHBA stadium recording 28 disposals and six clearances which was his best performance among an array of brilliant displays throughout the carnival.

Valente’s tackling is also a huge facet to his game as he’s able to hunt down his opposing on-ballers with his brute upper body strength that he has developed so early into his career. Up against Vic Country at Adelaide Oval, Valente was up against opposing captain Sam Walsh as the South Australian midfield took control with Vic Country starting to peg back South Australia’s early lead. With 16 disposals, six clearances and a game high 14 tackles, South Australia were able to smother the influence of Larke Medalist with the brilliant pressure led from the forefront of the South Australian captain.

Constantly discussed across the AFL industry Valente has been unfairly tarnished as too slow to impact at senior level. While Valente is not blessed with the blisteringly quick acceleration and speed that his SA teammates Izak Rankine and Connor Rozee possess, he certainly is not slow. Nevertheless, Valente has been tirelessly working on his athleticism with fast twitch training conducted before injuring his knee in the lead up AFL Draft Combine. He’s ability to run out games and getting across the ground with ease will be tested early into his senior career, as he continues to strengthen his running capacity.

Luke Valente has all the attributes to impact in his first season at the highest level and will entice clubs looking for a ready-made midfielder to step straight into their senior side in 2019. Valente is built very solidly for his age and may start his career potentially on the outside but will spend most of his career as an inside midfielder. It’s very hard to predict future leaders of football clubs as many shy away from the responsibility at an early age, but Valente has taken leadership in his stride. In the future Valente will be an integral part of an on-ball unit, as his high accumulation numbers will rise in the coming season.