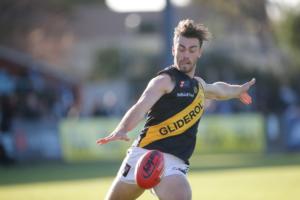 THE former West Coast Eagles player had an impressive 2019 SANFL campaign, not only becoming a key player for Glenelg, but named the best player in the competition. His Margarey Medal win exemplified that his best is too good for state level, and it earned the 22-year-old inside midfielder a State Draft Combine invitation. He has improved his athleticism to go with his contested ball winning abilities and surely is one of the first mature-agers to get a look-in at this year’s draft. At the combine, Partington smashed the 20m sprint (2.87 seconds) and agility test (8.15 seconds) as well as having a handy yo-yo test (21.2). For anyone who witnessed him run around in the SANFL this season, it was fairly clear he deserves another chance at the top level and was fitting that he claimed the league’s best and fairest. The only real question marks over him will be his size – 181cm for an inside midfielder when the prototype is much taller – and his versatility such was his dominance in the middle. Neither of these should really be a deterrence though, and the areas Partington could have improved he did, so it is hard to look past his efforts in season 2019.