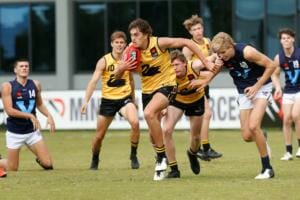 DRAFT ANALYSIS: “The premier ruckman in this year’s AFL Draft pool, Jackson is one of the players in this year’s Draft Pool whose upside is quite tantalising.”

THE Bullcreek-Leeming junior was one of Australia’s best junior basketballers before he put aside his basketball dream to concentrate on his football. The decision has paid dividends as Jackson is firming to be one of the first West Australian prospects picked in this year’s AFL Draft. Despite standing at just 199 centimetres, Jackson boasts awesome athleticism, excellent endurance, good skills and is capable below his knees.

After showing promise as an Under 16s player in 2017 and as a bottom-ager last year, Jackson took his game to incredible heights in 2019. Although he played just eight games for East Fremantle’s Colts team, Jackson won the Rising Star Award and finished sixth in his Club’s Best and Fairest. Across the eight games, Jackson averaged 19 possessions, three marks, three tackles, two inside 50s and kicked eight goals. He was named in the best on seven occasions, with his notable performances coming against Subiaco in Round 2 (17 possessions, 24 hit-outs and a goal), West Perth in rounds five (17 possessions, 28 hitouts, six inside 50s and two goals) and 17 (25 possessions and 36 hitouts), Swan Districts in round 14 (17 possessions, 38 hitouts and a goal), and Peel Thunder in round 15 (22 possessions and 41 hitouts).

As a ruckman, Jackson uses his awesome athleticism to leap higher than the other ruckman to win the hitout for his team, and due to his solid ruck craft he regularly palms the ball to his midfielders’ advantage regularly. He also covers the ground really well, and spreads forward, forcing his opponent to be defensively accountable. The main query about Jackson is whether his height (198cm) can qualify him as a full-time ruckman at AFL level. However it is worth noting that Paddy Ryder (197cm), Toby Nankervis (199cm), and Stefan Martin (199cm) are all below 200 centimetres. Another query about Jackson is his versatility. Some AFL Ccubs want their rucks to also be able to hold down a second position, whether it be in the forward line or in defence. At this stage, Jackson looks more comfortable up forward due to his overhead marking ability and solid goalkicking action. Once he is in an AFL environment he can develop his craft either as a forward or as a defender which will allow him greater flexibility as a footballer.