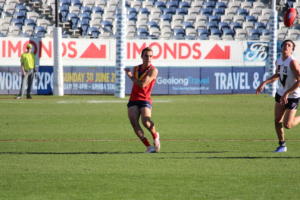 Luke Edwards has been on the radar of AFL recruiters for a number of years. The second Edwards son to transition through the ranks at Glenelg and Henley High School, Luke burst onto the scene last year when he featuted at the National Championships with South Australia as a 17-year-old. The son of Crows great Tyson, Luke was deployed down back for much of the carnival, where he displayed composure and poise beyond his years. This season, he made his League debut with the Tigers but was unfortunately concussed in the dying minutes of the game, which sidelined him for two weeks. Edwards returned via Glenelg’s Reserves side and performed consistently, without setting the world on fire, and appears likely to find a home at AFL level.

Edwards is slightly taller and a couple of kilograms heavier than his brother, Jackson when he was rookie-listed by the Crows in 2017. Edwards’ size has enabled him to play a range of roles already in his young career, including as a rebounding defender and as a midfielder capable of impacting the game on both the inside and outside. Much like his champion father, Edwards is a very natural and smart footballer who reads the play well when thrown down back and uses the ball efficiently. His sound reading of the play also allows for handy intercept possessions. Often trusted with kick-in duties at club and state level, Edwards is very calm and composed with ball in-hand – traits which were particularly noticeable at last year’s Under 18 carnival.

Edwards gave his 2020 season a pass-mark, but his work at the 2019 championships very nearly earned him All-Australian honours. Throughout the carnival, Edwards averaged 18.8 disposals, 4.3 marks, 3.3 tackles and 2.7 rebounds per-game – impressive statistics for a bottom-ager. When unleashed in the midfield, Edwards showed a strong ability to win clearances and contested ball. He is a good extractor and often looks to take advantage of his well-developed physique by imposing himself on the contest and throwing his weight around. Edwards sees himself playing in the midfield at the next level, but is a fundamentally sound player with the skillset to fill a role just about anywhere, such is his versatility.

Edwards is not renowned for his athleticism and his speed is an area which clubs may question. He can, at times, be caught out for this lack of quickness, particularly in defence. However his ability to make quick, smart decisions and execute well by foot often compensates for this lack of pure speed. Another area which Edwards could improve upon is his contested marking. Considering his size, if Edwards is able to consistently take strong marks around the ground, his value to a side would certainly increase. He also has not grown much from his 187cm standing at Under 16s level (currently 188cm), placing a question mark on his ceiling in terms of future development.

Given his strong bloodlines and close ties to the Adelaide Football Club, Edwards is one which Crows fans have paid close attention to over the past couple of years. Edwards struggled with some back injuries during the pre-season but pieced together a consistent set of performances throughout the year and was able to break through for his senior debut with the Tigers, alongside his older brother Jackson. He performed strongly in the Reserves in the latter stages of the year and, although he is yet to officially nominate the Crows under the father-son rule, Edwards’ versatility, sound skills and football smarts will no-doubt appeal to several clubs. Edwards is expected to attract a bid somewhere in the middle stages of the national draft, from the second round onwards.