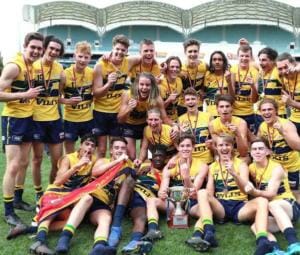 A lightly-built top-age midfielder/forward from Woodville-West Torrens, Beecken can push higher up the ground due to an elite endurance base that saw him record 21.5 on the yo-yo test at the State Draft Combine. He also recorded a 3.02-second 20m sprint and 8.090-second agility test to exemplify his terrific athleticism. He has to work on his decision making with giving the first option despite being a reliable kick of the ball. He averaged 75 per cent disposal efficiency in the 2019 season with the Reserves’ side playing five games, while having the most impact in the Under 18s, averaging 1.4 goals from 17.8 disposals and 3.8 marks. Most impressively, his defensive pressure as a forward and through the middle resulted in him laying a massive 66 tackles in his 13 games at the level – an average of 5.1 per game. While he still has to add more strength to his frame – averaging just 32.5 per cent of his possessions in the contest – he showed he can match it with bigger bodies when he was forced to win almost half of his possessions at Reserves level in contested situations. He is the kind of player who could play early on once he has built up greater strength credit to his endurance base and athleticism, but will need to tinker with his decision making further. Overall though, Beecken is an underrated prospect who might have missed out on state selection this year, but produced a consistent year to play a role in the premiership Under 18s’ Eagles side.