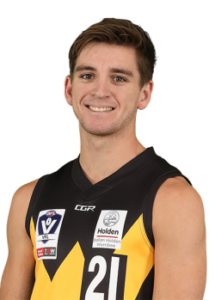 THE former Murray Bushrangers’ utility is predominantly a half-back who has the versatility to play at half-forward. His best role is that intercept, run-and-gun move off half-back, getting the ball down the field quickly in transition. His running ability, kicking and decision making are among the highlights in his game, while his contested ball and tackling are improvements he can make going forward. At the Rookie Me Draft Combine, Pinnuck clocked up a slick 8.07-second agility test and showcased his high flying ability with an 83cm running vertical leap. Pinnuck is a readymade option for a team needing a good ball user off half-back, and while he does have those defensive and contested areas to build on, his offensive work and attacking flair make him a damaging weapon.

DRAFT CENTRAL’S INTERVIEW WITH LOUIS PINNUCK AT THE 2019 ROOKIE ME DRAFT COMBINE: