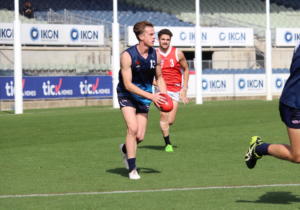 DRAFT ANALYSIS: “One of the better rebounders in this year’s crop, Butler is a competitive half-back flanker with sharp kicking and great tenacity.”

HIGH-possession half-back flankers are dime-a-dozen in each draft crop, but Sandringham’s Louis Butler is one with a point of difference. The ultra-competitive defender has not only proven his worth in setting up play from the back half with long rebounding kicks, but also showed traits more typical of lock-down types. Early in the year, Butler caught the eye with his ability to get to a number of contests on the defensive arc and sweep the ball up at pace, earning a spot in the Vic Metro side for all four games before being tried in a couple of different roles upon re-joining the Dragons squad. The kick-happy prospect seldom had a game under 20 disposals across his 10 NAB League games, getting as high as 31 touches and averaging 22.3 to show marked improvement in his impact on games from his bottom-age year.

To get the obvious ones out of the way first, Butler possesses the classic half-back traits of a penetrating kick, adept rebounding qualities, intercept abilities, and accumulation. The ball was not always up that end given the strength of Sandringham’s side, but Butler was a leader in the back six with his willingness to impact as many contests as he could and snap up the ground ball. He has just enough pace and power to break through tackles, allowing him to bring the key feature of that long kick into each game. The step up in quality at the national carnival also meant a step up in pressure, which tested Butler’s decision making and execution by foot. He had a trying start to his game against Vic Country for example despite finding a good amount of ball, but later executed a few bullet passes through the corridor – perhaps pointing towards an issue of consistency in this area. The real point of difference in Butler’s game is his aggression around the ball, meaning he is not the bruise-free kind of half-back who just wins a heap of easy possessions. His high-level endurance (6 minute, 9 second 2km time trial) allows him to get to each opposition attack and bring the ball to ground where he excels, giving him that repeat effort impact.

Execution under pressure aside, an area Butler could look to be continually improve is his versatility, which is more often an issue for midfield types. Butler was reigned in from his free-roaming role in defence to play a couple of lock-down roles on dangerous smalls later in the year, while also attending some centre bounces. If he can continue to find the ball and have an impact in these roles, it will bode well for further breaking the typical half-back mould. He has some terrific offensive traits, and once he can work on his consistency by foot under pressure and add extra strings to his bow, Butler could develop into more than a damaging rebound defender.